If you haven’t heard, some of the former giants of the education world haven’t been doing too well, particularly academic publishers, as evidenced by McGraw-Hill’s recent sale and Cengage’s filing for bankruptcy earlier this month. The bigs are faced with a slow death, or slow rehabilitation (with death still a possibility) by digitizing their content and services — and digitizing fast.

Kaplan is one of those familiar names, as the 70-year-old test prep company recently launched its own TechStars-bankrolled “EdTech” accelerator in NYC, while its venture capital arm moves to invest in more digital education startups, like Treehouse. Today, it’s taking another smart step toward a digital future by snapping up the test prep assets and social learning platform of veteran EdTech startup, Grockit, the San Francisco-based maker of social learning apps and technologies.

Why is this a smart mutual decision? Well, for starters, as Kaplan CEO Andy Rosen recently said: “Continuing to cultivate new innovations in education technology is critical to the future of the company and the industry at large.” Yup. For many of these old hands of education, developing digital tools internally will be equivalent to starting from scratch. There has been a new wave of education startups that are innovating and building mobile apps and software across the educational spectrum.

There’s a ton of early-stage capital moving into education, but not so much in the series A and B range. Education startups are starting to feel the crunch and will continue to for the foreseeable future, which presents a great opportunity for what corporate acquirers there are in the education space.

As a matter of fact, CB Insights laid this out for us in May, and as you can see, Kaplan ranked fourth on the list in the number of acquisitions it made over the last three years. With its acquisition of Grockit, the company is just one purchase behind Blackboard and Macmillan, and it really wouldn’t be surprising to see Kaplan continue playing the role of EdTech buyer. As long as it has the cash, there’s no reason not to continue.

It’s also a smart move, because Grockit went through a significant shift of focus over the last 18 months or so. The startup first came on the scene in 2006 as a video test prep course for standardized tests, before re-launching at TC50 in 2008 as a social learning service, combining game-ification with personalized, adaptive learning-based test prep programs. The idea was to become a more effective way for students to study for tests — either by themselves or in groups.

While Grockit has survived, it never quite exploded, and in May of last year, it launched Learnist, which was dubbed its “Pinterest for education.” The team had developed Learnist internally, sort of on a whim as an experiment to potentially use as a feature add-on within their existing solution. They launched it and it took off over the last six months, so eager to ride the wave, they shifted their focus completely to Learnist. Last December, the team raised $20 million from Discovery, Summit, Atlas, Benchmark and others and that cemented it.

While the raise was behind the Grockit name, really it was for the market opportunity the founders and investors saw in Learnist. As a result, no surprise, but we’ve heard from sources that, as a result of this shift, the founders have been looking for a buyer for Grockit since. With Kaplan having one of the most recognizable names in the test prep market, the deal makes a lot of makes sense. And, from what we’ve been hearing, although the two companies did not disclose the terms of the deal, it works out well for Kaplan, because it doesn’t exactly break the bank, while allowing it to acquire digital test prep solutions it can presumably put to use fairly quickly.

In terms of what exactly Kaplan did acquire, Grockit founder Farbood Nivi clarifies, telling us that “Kaplan acquired the Grockit name, the Grockit Test Prep business, and the Grockit technology and platform.” However, Kaplan is not hiring any of its employees, who are all staying on to help build the new platform, which has been spun out of Grockit as its own company under the Learnist name, he explains.

The funds from the round the company raised in December are staying with Learnist and everything remains largely unchanged in day-to-day operations, just as it’s been for the last year, Nivi added. As to the sale, “it will considerably increase our runway and give us options without dilution, so it’s huge for us.”

At the time of the acquisition, the founder says that “over a million people” were using Grockit and, collectively, people had spent “decades studying together” on the platform over its five-odd-year history.

“As we seek to better understand the role of social learning and gamification in test prep effectiveness, the acquisition of Grockit branded assets accelerates our own efforts,” Kaplan EVP Rochelle Rothstein said in the company’s statement today. “We’re looking forward to exploring platform synergies to improve our student experience.”

More on the announcement here and Learnist here. 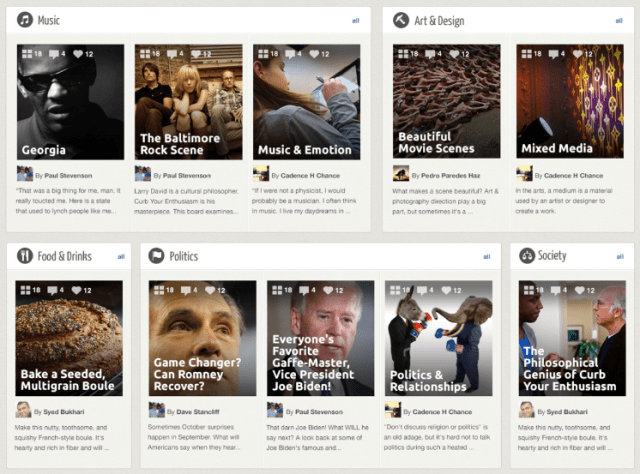