30 years later and our word processing software hasn’t evolved, not even to adapt to mobile. That changes tonight with the launch of Quip, a freemium new word processing app from former Facebook CTO Bret Taylor’s new startup. Quip works on desktop but is designed for mobile. It automatically formats documents to the size of your screen, offers in-app collaboration and messaging, and even works offline. 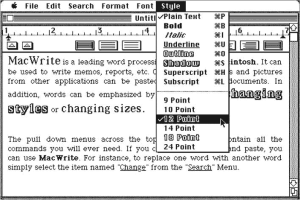 “Quip is a modern word processor optimized for the era of tablets and phones”, Taylor tells me. We’re in the middle of a transition away from the desktop computer, yet word processors have stagnated. For dramatic effect, Taylor dropped a screenshot of MacWrite (shown to the right) into the Quip introduction post, and told me “It’s comical how similar that looks to what we use today.”

The shift to mobile is so seismic that it trumps the importance of all the legacy word processing features and “gives us an opportunity to change this software”, Taylor says.

That’s an opportunity Microsoft was stupid to wait so long to address. It’s only just getting a real version of mobile Office out there. While full featured, it’s billed as a mobile companion to Office for desktop rather than truly mobile-first, and on iOS it’s only for Office 365 subscribers. Quip’s freemium model has a lot of runway when you think about how widespread the need for document editing is.

Quip looks polished, which makes sense considering Taylor specifically left Facebook in June 2012 to start the company with Kevin Gibbs, the father of Google Apps Engine. Taylor redirected his backchannel.org site to Quip.com in December 2012, revealing the startup’s name to the world. While no details were released, our own Ingrid Lunden sniffed out that it might be a collaborative writing app based on the pen in the app’s icon and a patent for cloud collaboration awarded to the startup.

Now we have all info. So what makes Quip different?

First it adapts documents to whatever size or shape screen you’re working on. If you’re on an iPhone, an embedded photo could appear full-width, but on an iPad it would appear on the right surrounded by text.

The collaboration tools might be the most exciting part. You can share any document with another user, and when they first open it you’ll get a notification. Taylor says this lets you jump in and walk them through the doc using Quip’s internal messaging system. “It feels like sitting at a desk with someone around a piece of paper” Taylor tells me.

All your collaborative edits and messages are turned into a chat-like thread you can follow. To find your future co-writers, Quip asks you to sign in with Google and let it access your contacts. That might seem like a snub to Facebook, but really it just denotes that Quip is built for serious business, not just playing around with your friends.

On the iPad you’ll see the communication stream right next to your document, whereas you slide it out on iPhone. You can @ mention people to call their attention within documents, quickly add images, link out to other Quip docs or folders, and use formatting tools to add your own style. I love the “Use most recent photo” option alongside the standard “Take with camera” and “Select from Photos”, though its a shame that’s only for Quip messaging and not document editing.

From the Quip “desktop” home page of the app you can see all your current documents and check your inbox for new updates and messages. If your connection drops while you’re writing, no sweat. Quip will synchronize your documents back to the cloud when you get your connection back. Taylor says he loves how seamless this works while he commutes on San Francisco’s BART subway which has spotty mobile reception.

The elephant in the room is how Quip works with Microsoft Word. Right now there’s no special way to import docs from Word or export them to the old girl. Quip only spits out .PDFs. However, Taylor says his team worked hard on flawless copy and paste. Quip will preserve formatting when you copy text to or from Word.

Quip is free for personal use, but charges $12 a month per user for a business license that lets you collaborate with more people. It’s available now for iPhone, iPad, and desktop, and Taylor says an Android app is in the works. Typing tools were a lucrative business for Microsoft on the desktop. That opportunity in mobile let Quip raise $15 million in Series A funding led by Peter Fenton at Benchmark, which pays for its 12-person team. This isn’t Taylor’s first startup rodeo, luckily. After co-creating Google Maps, he built FriendFeed which later sold to Facebook.

Quip will have to displace the now-misinformed idea that word processing is best done on the desktop. The other writing apps it will face off with include Apple’s own Pages, stripped down but cheap apps like iA Writer, and more advanced but pricey options like Textilus.

Quip does have a bit of a learning curve. Not necessarily because there’s much wrong with the design, but because you have to unlearn a lifetime of Microsoft Clippy-instilled habits. There are a few awkward gestures in Quip for iPhone. You pull down from the top to reveal your desktop, but I found myself accidentally opening the iOS notification tray.

Once you get the hang of Quip, though, it seems like it could finally let you express your inner wordsmith from your couch, commute, or coffee spot.

Quip might be a word processing app now, but its ambitions could be much bigger. It combines features of some of the top productivity, collaboration, and workplace communication apps. It may be able to steal time away from Google Docs, Hangouts (Gchat), Asana, Yammer, and Skype. Today it only replaces those tools for tasks surrounding text document editing. But imagine if once Quip gets word processing sorted, it goes after spreadsheets, or presentations.

Quip has the team and funding to go hard at this huge space. I wouldn’t be surprised if it became an hot acquisition target. The only problem is Taylor and Gibbs have earned their nest eggs already, and might be able to hold out and see this through

The applications of an integrated communication and collaboration platform are vast. If no one else builds this mobile-first, and Quip nails the user experience, we could be looking at the start of a big company. 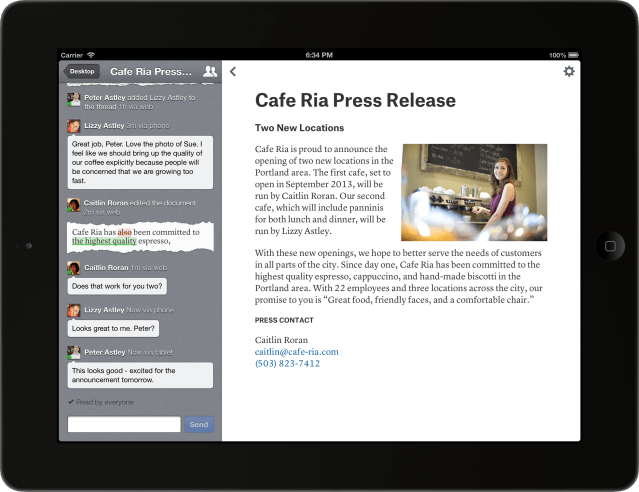