Y Combinator-backed Floobits, a new startup allowing two people to write software at the same time on the same codebase — known as pair programming — is officially launching today to help better connect remote developers and distributed teams. What makes this company’s implementation interesting, however, is that instead of requiring developers to use a web-based editor as many pair programming solutions today do, Floobits users can pair program directly within the text editors they’re already comfortable using through the installation of plug-ins.

And for those who do prefer to work via an online editor instead of a native one, Floobits has integrated its web-based editor with one-click access to Google Hangouts for chat, audio and video conferencing. 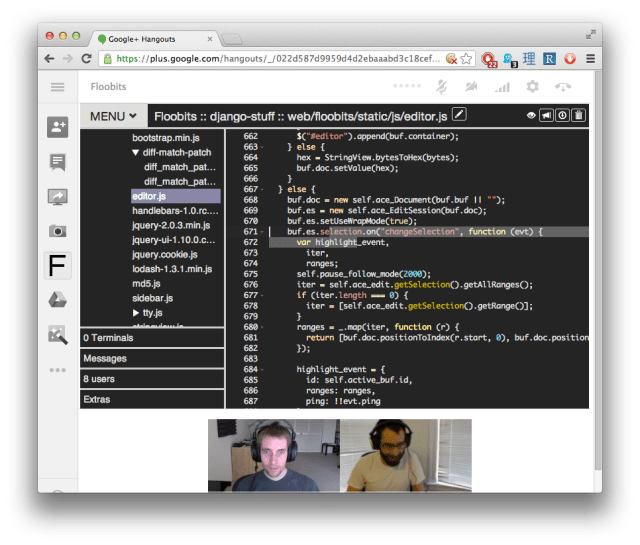 Meanwhile, on the native side, the company currently supports plug-ins for Sublime Text, Emacs, and VIM. However, Floobits’ founders admit that some of these plug-ins work better than others at present, with Sublime Text being the least buggy, and VIM being the most difficult. In fact, the company may launch its own version of VIM in the future, as there were a number of “workarounds” (read: hacks) needed to make Floobits work.

Floobits was officially founded this February by former Rackspace engineers Geoff Greer (who came in via the Cloudkick acquisition, and who built this) and Matt Kaniaris. But in reality, they’ve been working on the idea since last August — and yes, often via pair programming.

Kaniaris and Greer pair programmed together while at Rackspace, and after leaving, they realized that they wanted to build something that could help others do the same. “The biggest advantage with pair programming is that when you get stuck on something and you’re alone, you can get stuck for an hour or two at times,” explains Greer. “But having a person next to you who notices the one tiny detail that you need to fix…that saves so much time and frustration.”

Of course, pair programming costs companies more because it means less code is produced per person, but its larger goal is to reduce the bug count. And while it’s not necessarily an environment that needs to be used 100 percent of the time, it can serve as a great learning tool.

Going forward, the founders see Floobits better capitalizing on the benefits of pair programming by expanding its capabilities to include more social features, such as allowing strangers to find each other and pair up, or letting users watch others code publicly in real time. Eventually, the team also wants to enable a situation where a domain expert could join users’ sessions to help them get up to speed on a new language or library they had just started to use. “That could massively improve productivity for programmers,” notes Greer.

At launch, the service offers freemium pricing, where free accounts have up to five workspaces available. But to work privately, a paid account starting at $15/month is required. Pricing for businesses and the enterprise is also available. In the future, the company will aim to better serve those larger organizations with a behind-the-firewall solution, as well. They will also roll out support for more editors, including IntelliJ by year end, and then Eclipse or Visual Studio will follow.

Floobits already has a handful of paying users, the team says, including three organizations, one of which is fellow Y Combinator startup, StatusPage.io. The company, only a team of two for now, has no outside funding beyond its YC backing and funds from YC VC.

Floobits soft-launched its service on Hacker News recently, which helped them catch some bugs and better prepare for today’s public debut. The HN launch kind of melted Floobits’ servers, admits Greer. “Once we had 300 people in the same workspace all typing at the same time, it didn’t work out so well,” he says. But he adds that they’ve since moved to more servers, and faster ones at that.

Let’s see, shall we? Interested developers can try Floobits here for free.