Right now Google Glass sits at the apogee of geeky, wearable technology.  Last month, interviewing a Glass-wearing Robert Scoble, Newsnight’s Jeremy Paxman memorably debunked it in his opening question as “that thing on your head. ” Getting non-techie people to view Glass as anything other than ludicrously geeky is going to be an uphill fight for Google.

Arguably, though, even more of a blocker to Glass adoption is people viewing the technology as the epitome of creepy, thanks to its built-in camera. Sure a digital eye sited at eye-level lets you share a nice view of that mountain you can see from your hotel window. But in more everyday scenarios, it also lets you video your fellow humans as they go about their business, and that privacy intrusion is inevitably going to cause some friction. Throw in the whole NSA PRISM surveillance fallout and stuff like this is inevitable.

Add to that, even though Google has banned (even more creepy) facial-recognition apps on Glass’s Mirror API, it’s possible to envisage a workaround that leverages Google’s Hangouts feature — which shares real-time field of vision — to get around the bar. Marco Vanossi, co-founder of GeoPapyrus, pointed out this workaround to TechCrunch — and demonstrates how it can be made to work in this video, creating a Hangout with a robot assistant called Dexter that then analyses what the Glass wearer can see.

“You can share your camera view through a Google Hangout and the content in it (people, objects, places, barcodes, qrcodes) can be analyzed and identified,” he tells TechCrunch. “As a result, information can be overlaid on top of it and shown back on your screen. This means that the Hangout app, built and distributed by Google on every Glass device, could be used to violate its own privacy rules.”

All of which suggests there may be room for an eyeless Glass-style product that preserves privacy by being receive-only — and therefore can’t be accused of spying. Enter GlassUp. GlassUp is a prototype pair of augmented reality specs that does not include a camera. It’s currently seeking funds to start manufacturing on Indiegogo. The glasses are designed to allow the wearer to receive text-based messages and updates overlaid over the central portion of their field of vision — so while they intrude on the wearer’s vision, they can’t be accused of intruding on the privacy of the people around them.

GlassUp’s creators envisage a typical use-case being a pedestrian or a motorbike rider wanting to navigate handsfree and without having to stop every few yards to consult a map/smartphone. Or a tourist wanting to get info about the historical landmarks they are seeing pushed to their eye-line as they explore a new city. Other imagined use-cases include for cooks or warehouse workers needing info as they work. 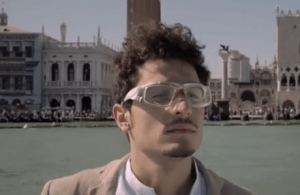 The device is basically a second screen output for a smartphone, connecting via Bluetooth, that’s worn as a heads-up display. It has a monochrome projector to display text updates, helping to extend the battery life of the device. The creators say they intend to release some apps themselves, but also plan to release an API for Android, iOS and Windows Phone to allow developers to extend its functionality.

Having intentionally stripped back the hardware of GlassUp to remove privacy concerns its creators have also shrunk the cost. The price tag for the device starts at $299 — considerably cheaper than the Google Glass Explorer’s hefty price tag of $1,500.

GlassUp’s creators are hoping to raise $150,000 on Indiegogo and have so far managed to reach just over half their goal, with 11 days left on the campaign. However, an update on their crowdfunding page notes that they will deliver products even if they fail to achieve their funding goal — thanks to unnamed investor backers. GlassUp is due to go on sale from February next year.