A new Kickstarter project wants to let a little light shine in on your mobile photos – much more than the built-in flash on devices like the iPhone 5 can provide alone. The iblazr is an external flash that uses four high-output CREE LED lights to provide a whole lot of illumination via a small piece of hardware that plugs into your gadget’s headphone jack, easily outgunning the iPhone’s flash, and giving the flash-less iPad something to shine on photographic subjects.

The iblazr is entirely synchronized with your device’s camera shutter, too, thanks to a proprietary free app for iOS and Android. It has a number of different features, including photo and video modes, a constant light mode, changeable brightness, and a built-in, USB rechargeable battery that lasts up to 1,000 flashes. The iblazr recharges via a flexible USB cable, and it even works without a smartphone or connected device at all, providing you a tiny pocket flashlight as well.

If you’re serious about your Instagrams, or about not carrying a dedicated camera around and still getting good shots, the iblazr looks to be a smart option, as it offers less chance to result in red-eye than the built-in flash, more than doubles the brightness possible and can even act as a fill flash for daylight outdoor shots to prevent exposure from becoming unbalanced between light and dark background and foreground. 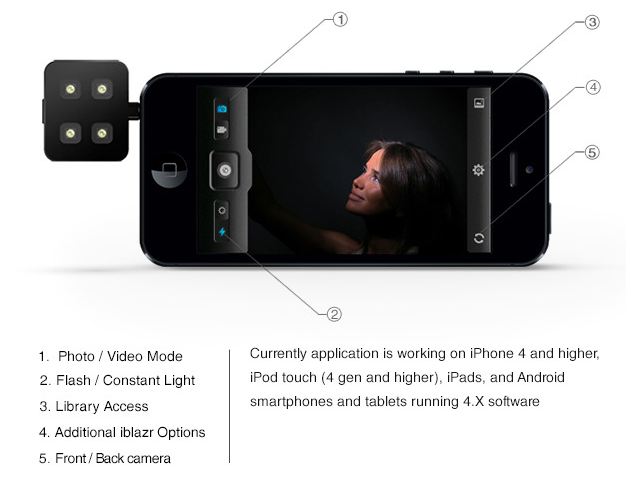 The iblazr includes its own free app, but its creators also made it open source, and are offering SDK access before its general release to backers. Already a number of apps are signed up on both Android and iOS to take advantage of the accessory, so it’s possible your favourite mobile photography app will be able to take advantage, too.

iblazr is the product of a team based in Kiev, Ukraine, which includes a number of designers and engineers who have worked on hardware and software projects related to camera and photography gear before. Two of the team members were the first to solve flash synchronization issues with external devices on the iPhone, making the iblazr’s tricks possible.

The startup is looking for $58,000 in funding, and has raised nearly half so far. $39 is the price of admission for a pre-order pledge, which gets you one white or black iblazr with charger, with an expected ship date of December, 2013.