Geeksphone’s original two developer-focused devices sold out a few hours after going on sale — doubtless helped by their low prices of $194 and $119 respectively. The Peak+ looks likely to garner similar levels of demand, thanks to a similarly low pre-order price, although there is now more competition for Firefox devices — with Telefonica selling the ZTE Open in Spain (and elsewhere) for as little as €69/$90. (Albeit, the more expensive Peak+ does offer beefier, mid-range specs vs the very budget ZTE Open.)

Geeksphone has created a pre-sale reservation list for consumers wanting to buy the device for a “one-time, limited promotional price” of €149/$196 (excluding taxes) — after which it will be sold at a “standard price” via the startup’s online store, from September. Geeksphone would not confirm exactly how much the phone will ultimately retail for, saying only it would be “slightly higher”. 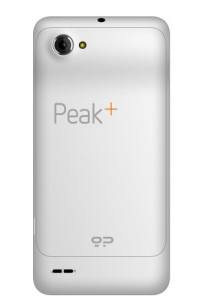 On paper, the Peak+ is a slightly beefier version of the original Peak, with double (1GB) the RAM and the latest version of the Firefox OS (v1.1). Other specs are the same as the original Peak, including its dual-core 1.2 GHz Qualcomm 8225 chipset, 4.3” qHD IPS multitouch screen, 8-megapixel rear camera (with flash), 2 megapixel front camera, and tri-band UMTS / HSPA, plus a 1800 mAh battery. But Geeksphone says it has improved battery management and graphical performance.

It also says it has “enhanced” the external materials and inner construction for “a more polished finish and pleasant touch, as demanded by our users”. Storage wise, the Peak+ has 4GB of internal storage which can be expanded up to 32 GB via MicroSD. It will also come with 25GB of cloud storage (from Fiabee).

Geeksphone said the vast majority (93%) of buyers of its earlier developer devices came from outside its home country. Demand was apparently especially high in Germany, France and Japan. Several other Asian and Latin American countries were also said to be very keen on the devices.

Mozilla’s Firefox OS is aiming to provide an open alternative to Google’s Android OS, especially at the budget to mid-tier smartphone handset price range, and has signed up considerable carrier support for the initiative. This contrasts to Canonical’s high end approach, with its circa $600 Ubuntu Edge smartphone — currently seeking $32 million in crowdfunding backing to build an open source-based smartphone that can double as a PC.

Update: A Mozilla spokesperson has been in touch requesting a “correction” that the Peak+ is not a Firefox OS phone, but rather is “based on Boot to Gecko technology” — aka Mozilla’s original codename for the Firefox OS Linux-based open source software project.

“We want to clarify that this new phone that was announced is based on Boot to Gecko technology with pre-release software, but is not a certified or supported Firefox OS device,” the spokesperson said in a statement.

This is basically an issue of brand control. It’s worth noting that Mozilla has been criticised by others in the open software movement for the lengths it goes to to defend its branding. And Firefox OS is a key new brand for Mozilla, which it’s clearly keen to protect and control.

As to why Geeksphone’s Peak+ does not have Firefox OS branding, TechCrunch understands the Firefox OS branding scheme is currently only available to carrier-backed devices. We’ve reached out to Mozilla for clarification on what mobile makers have to do to achieve Firefox OS certification/branding and will update this post with any response.