Shopkick, the iOS and Android app that lets users search for products, find out where they are sold, and then automatically get checked in at retail locations for discounts to buy them in stores, is making another move today that widens its remit beyond simply driving more bricks-and-mortar business. The startup is launching in-app purchases, starting with 30 major stores that were already a part of the Shopkick’s product aggregation platform, including Target, Macy’s, Best Buy, Old Navy and Anthropologie.

You might think this sounds like a step away from Shopkick’s original physical store business, which the company tells became profitable at the end of last year. Co-founder and CEO Cyriac Roeding paints it another way: it’s an expansion of Shopkick’s revenue streams, yes, but it also will help stores compete better against their biggest threat today: Amazon.

“We’re not including Amazon in our app,” he says flatly. “Using our app to buy goods means you will be buying goods from the actual stores, not Amazon. We are the anti-Amazon coalition.”

Shopkick has for a while been pushing the concept of the so-called “omni-channel” shopper — the idea here is that a person who buys goods on mobile devices or via PCs are more likely to be more valuable physical-store shoppers, too.

Roeding maintains that this is not just a case of shopaholics-gotta-shop but that going online actually lifts offline activity even for normal people. This data from Forrester appears to support that idea, with growth in digital-influenced physical shopping revenues currently growing faster than e-commerce sales, respectively at 19% and 12%: 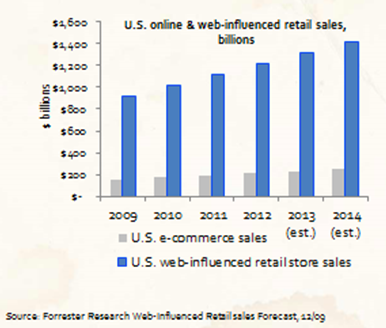 Indeed, Roeding tells me that right now, revenues from physical stores are 100% of Shopkick’s sales, and even with new services like in-app purchasing, he doesn’t expect that to come down to any less than 90% in the future. 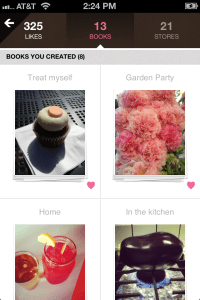 Shopkick, for background, works like this: the company offers a mobile app, which lets users search for products by name or by store. If by name, you are then provided with lists of who is stocking the product in question (this is where the aggregation comes in). You can also see how popular a product is, and you can tag it. When you visit a participating retailer, you get a ping on your device if you have the app open. That ping is very accurate, because it relies on actual hardware that Shopkick’s installed in the stores itself.

In the past, when you bought things, or even walked into stores, you got “kicks” on the app — effectively loyalty points for future discounts. Now you can get kicks as well as follow through and buy the product through the app. Roeding says Shopkick gets its own “kick” (ie payment) when a consumer “likes” a product, and then again when the consumer subsequently buys it, in the form of an affiliate fee if the purchase is made with a linked credit card (which is also how the consumer loyalty points get redeemed). The percentages vary because some deals are direct with brands, while others are with stores, and they range from fashion apparel through to printer cartridges.

The unique selling point for retailers is that, while some power shoppers might download those stores’ apps, Shopkick offers a “shopping mall” style experience where several stores can get their products and brands in front of shoppers who may not be regular enough to use their own bespoke apps.

Shopkick, which at the end of 2012 said it helped drive $200 million in revenue to stores and was itself profitable, is not yet revealing active user numbers on its platform, but Roeding says that there are now more than 1 billion product views through the app every quarter. That means Shopkick is finally reaching a critical mass where it might start to consider what its next steps might be.

That will likely lead it to finally go international — in some ways long overdue for an app that’s been around since 2009.

Roeding, an ex-pat who hails from Germany, says this has been intentional. “Once we have that consumer experience nailed, we are going international. It’s certainly getting interesting for us [read: good returns because of scale], and there a lot of interest for shopkick to go abroad.”

He wouldn’t comment on whether that might mean Shopkick will look to raise more money — it’s raised $20 million from top VCs like Kleiner Perkins, SV Angel, Reid Hoffman, and Citi, but the last round was in 2010 — but that seems like a good bet.

What’s perhaps interesting, too, is how the company will evolve not just in terms of geography, but also product-wise going forward. For all the me-too e-commerce services out in the market today across different geographies, Roeding points out a kind of unique lock-in with the Shopkick platform. “You can’t just clone Shopkick because you need, on top of consumer users, technology on the retail backend, along with partnerships to implement the backend. You need time to do this.”

When Shopkick raised its first round of money, Roeding said that it hadn’t actually created its radio-based hardware yet. “We got funded by Kleiner without a solution in place for measuring the threshold of users walking into stores,” he says of the hardware that emits high frequencies unique to each store and recognised by the app to chart users. “GPS could not do what we wanted it to do, so we built it. And we are working on improving it more, adding presence versus vicinity. We are constantly building out that technology.”

Having said that, Roeding adds that “Shopkick was never built around technology per se,” and that they are not wedded to the hardware or anything else for that matter.

In fact, when (not if) Shopkick moves into point-of-sale purchases — a very logical next step for “closig the loop” on commerce for the company — it will be in partnership with other technology providers. In a market that appears more focused today on land grabs rather than more innovations, there doesn’t really seem to be any point in the company reinventing that wheel.