The emergence of vertically integrated e-commerce operations like Everlane and Flint and Tinder highlights how a new generation of startups is using entrepreneurial muscle for economic regeneration in the U.S. And the growth of these companies is a sign of how consumers are supporting this idea, too. New startup Maker’s Row now wants to take this concept to a much wider audience. Today it is announcing a $1 million seed round to help build out a marketplace that will connect more U.S. manufacturers with small businesses that need to get things made. The round is being co-led by Index Ventures and Comcast Ventures, with participating angels including Reddit’s Alexis Ohanian and Joanne Wilson, wife of Union Square Venture’s Fred Wilson.

Currently, Maker’s Row is focused on apparel and accessories production. But Tanya Menendez, the COO and co-founder along with CEO Matthew Burnett, and Scott Weiner, tells me that is just the beginning. “We are using the money to build out our tech team and expand into new industries,” she says. And because so often making something is about having several different players in close proximity to each other working together, she also tells me that the company will be further expanding its focus on regional clusters, beginning with a special microsite for Newark, NJ.

Maker’s Row was launched in November 2012 and has already been working with thousands of businesses to boost domestic manufacturing. (Originally, Menendez says Brooklyn-based Maker’s Row was funded by angel investors and started off through the Brooklyn Beta Summer Camp.)

Maker’s Row is a startup booster in more ways than one: To date its clients have been small, new businesses in their own right — unlikely to be household names for most people (yet). Before Maker’s Row, they say that their searches for factories to make products led them to China or further afield; or they would have spent many hours, days and weeks looking for people to produce their designs.

Maker’s Row offers a kind of proto-Alibaba for U.S. businesses. Those who are in the market for either materials or factories to execute a product can go to the site, where they can search by category (currently these include ideation, pattern-making, materials, sample-making, tooling and production) or keyword (below I’ve typed in “zipper”) and you get in return a selection of results, laid out in a visual, grid-style pattern so that you can start looking a bit closer and refining.

Indeed, just as Uber has done with car services, or Airbnb has done with finding a place to stay when you’re visiting a city, Maker’s Row has applied new solutions to old problems — the call to action that has stuck in my mind for months now after hearing David Sacks describe it last year. (To add to that, this is another example of Paul Graham’s suggestion that startups making things for other startups is supremely useful.) As 42 Floors brought a new kind of slick quality to presenting office space rentals online, for many of the factories and parts producers in question, this will be their first foray into introducing their products and services in such a way.

Menendez tells me that the business model works like this: factories pay a monthly or yearly subscription fee to be listed but doesn’t specify what it is. Maker’s Row does not take any commission on the actual deals. It’s not clear if this works out as a better deal financially for the startups, but there are some forces in favor of Maker’s Row, in addition to the basic ideological argument in favor of domestic economic regeneration: In the past, U.S. manufacturing partly declined because other options (e.g. in China) would have been cheaper, but nowadays, currency differences and general efficiency to execute and delivery faster could help boost competitiveness for U.S. factories.

Longer term, Maker’s Row will improve its returns by offering its marketplace out to a number of different verticals. At a time when companies like Apple and other big players are also looking to boost their U.S. production lines, you can see where something like Maker’s Row might serve to link up not SMEs but more.

“From first-time entrepreneurs to big brands, everyone faces the same problem when it comes to finding a factory in the US,” said Burnett in a statement. “When your resources are limited, your options are limited and overall business suffers. Maker’s Row provides the means to which a good idea can become a great product here in the United States.” 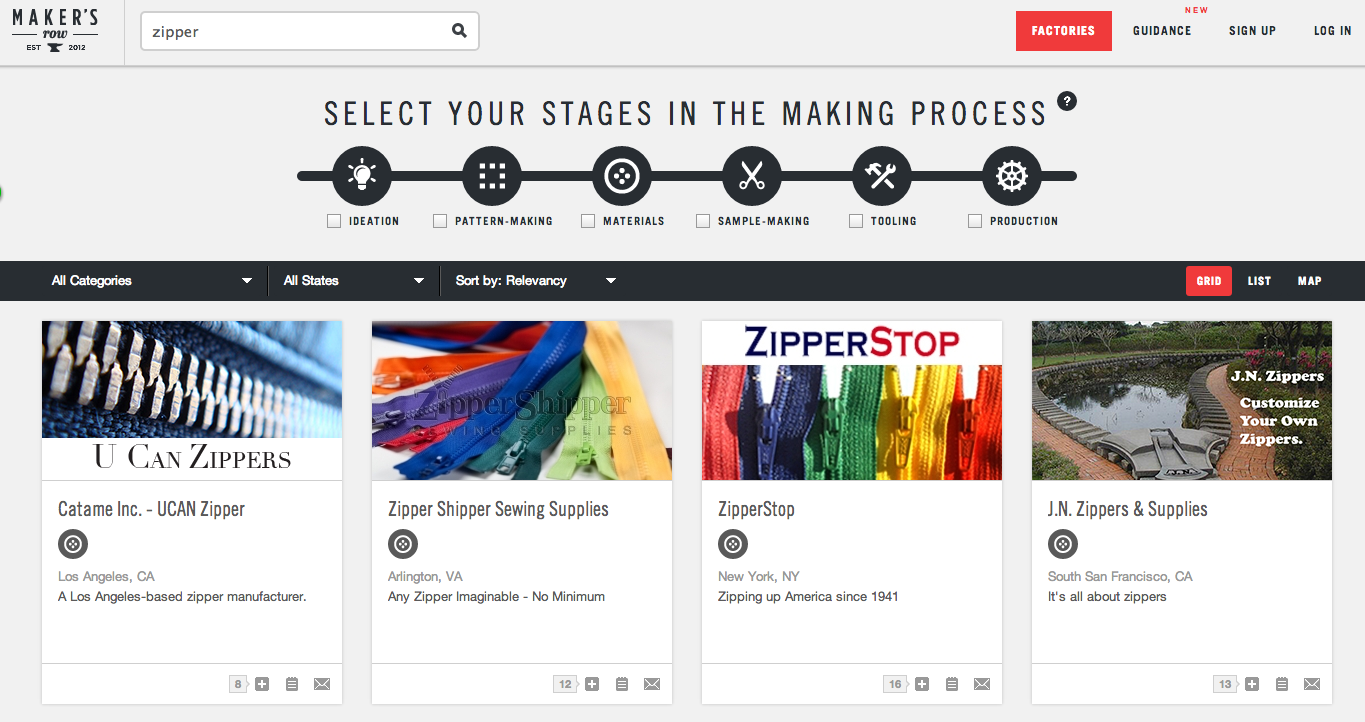