So, I was searching for pornography on Tumblr this morning. (It was work-related!) Word was, the now-Yahoo-owned blogging network made a significant change to the way adult-themed blogs could be discovered on the site, which even further hid their content from public consumption. Tumblr finally addressed the issue this afternoon following user outcry.

By some reports, adult-oriented content accounts for 11.4 percent of Tumblr’s top domains.

Tumblr’s blog post today addressed this problem, playing it off as something of a bug:

…As some of you have pointed out, disabling Safe Mode still wasn’t allowing search results from all blogs to appear. This has been fixed.

That’s a very vague statement, however. It doesn’t explain which blogs were affected by this (NSFW blogs? Adult blogs? Both?) or what exactly happened. 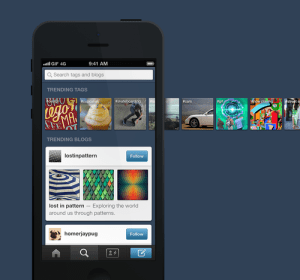 Tumblr’s post muddies the current issue of adult and NSFW content not showing up in search results by also explaining that on certain mobile platforms, search works differently. All this is saying is that native apps on Apple’s iOS platform are more restricted than those on other mobile platforms or the web. That is, Apple doesn’t allow adult material in its apps, so a number of tags have to be censored. This isn’t really Tumblr’s fault — it’s the nature of doing business on Apple’s platform.

But because some may have tried to search for what seem to be innocent tags, like #gay, and found it blocked, there was suspicion that something had changed. Tumblr says that it needs to implement more intelligent filtering, but in the meantime it’s making the #lgbtq tag available on iOS, as it includes moderated content.

This was never intended to be an opt-in flag, but for some reason could be enabled after checking off NSFW → Adult in your blog settings. This was confusing and unnecessary, so we’ve dropped the extra option. If your blog contains anything too sexy for the average workplace, simply check “Flag this blog as NSFW” so people in Safe Mode can avoid it. Your blog will still be promoted in third-party search engines.

It’s an odd way to explain the situation, as not only is it unclear what happened, it implies that Tumblr itself is not sure what happened either (“..but for some reason…”, the post reads).

Could it be, perhaps, that the “some reason” was a policy change that Tumblr had hoped would fly under the radar, but did not?

The company concludes its lengthy mea culpa by saying that beyond the fixes listed above (one being the NSFW option dropping the Adult flag, and the second being the bug fix related to searches for Adult and NSFW content on Tumblr not returning results), nothing else has changed recently.

Curious about that claim, we took a look at Tumblr’s “NSFW” policy page in the Internet Archive’s Way Back Machine, and found that, actually, the page has been consistently updated throughout the year. The fact that Tumblr took the time to rewrite or explain its policies in more detail here seems to contradict the shrug-of-the-shoulders tone of today’s blog post which tries to play off everything that was changed as either bugs or confusing features that needed to be fixed.

Here’s what we found on the Way Back Machine.

In a screenshot of Tumblr’s policy on April 30, 2013, the page stated that blogs flagged “NSFW” would still appear on tag pages once Safe Mode was turned off. (This is basically how users expect Tumblr to behave): 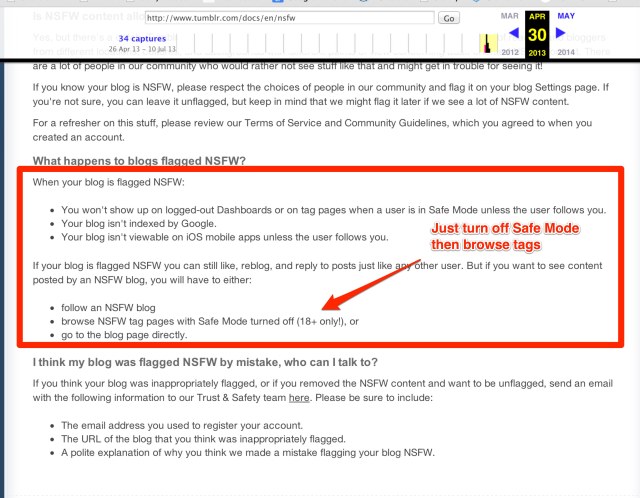 Then, in a screenshot recorded in June 2013, the policy had been clarified to better distinguish between NSFW blogs and Adult blogs, since Adult Tumblr blogs were then no longer being indexed by Google, but NSFW-only blogs were.

This is different from the guidelines above which had specified that all blogs tagged just NSFW would be delisted from Google. Now, Tumblr was trying to separate things that were just “not safe for work” from the actual pornography: 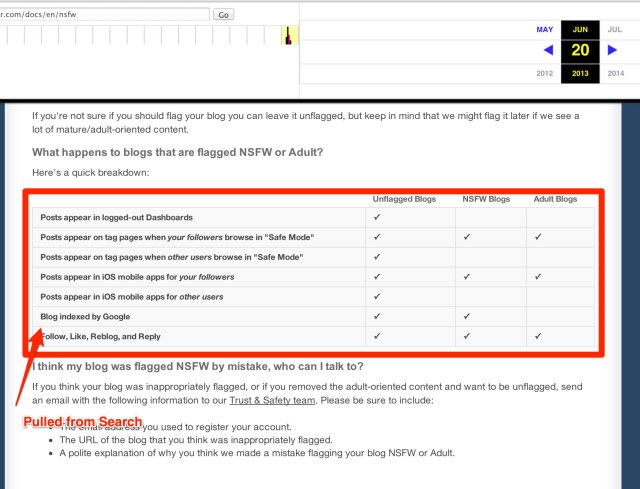 Finally, in a screenshot recorded this month, that handy chart had been updated yet again to include a new setting that indicates that some blogs would not see their content surfaced in searches performed on Tumblr itself.

“NSFW” blogs would be indexed by Tumblr, the chart informs, but “Adult” blogs are not: 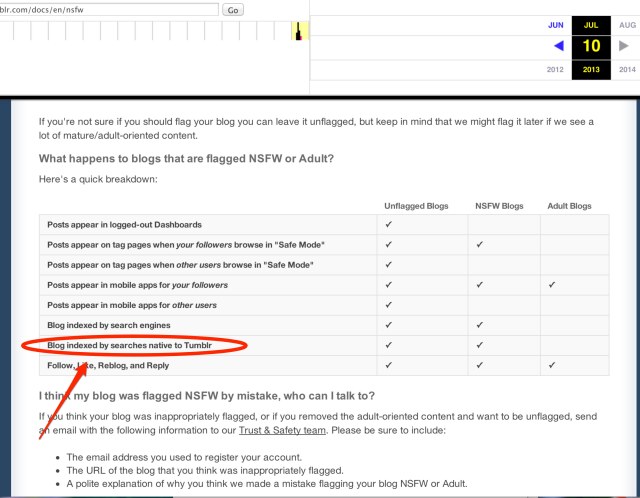 Again, this implies that the company did intend to crack down on the visibility of the pornography, and had been using the “NSFW –> Adult” flag as its guideline. Those sites with this flag had already been pulled from both third-party search engines, and now from search on Tumblr itself.

As of today, it sounds like Tumblr is going back to the original policy whereby NSFW content either appears or disappears based on whether users have Safe Mode off or on. (The “Understanding NSFW and Adult Blogs” page is currently marked as “being updated,” so no word yet on how the policy will be written next.) 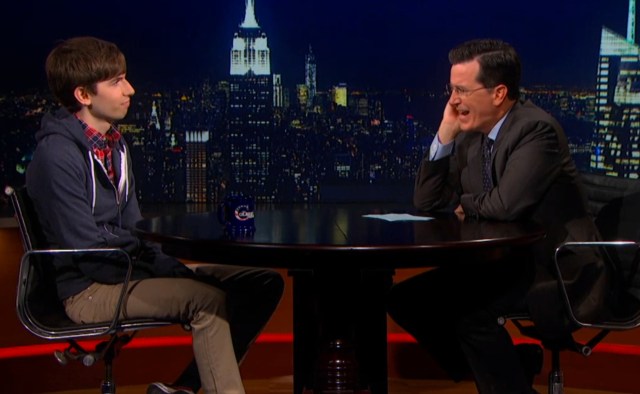 It’s unfortunate timing for a backlash like this from Tumblr’s users. The news comes during a week when founder David Karp, appearing on The Colbert Report, spoke of Tumblr’s inclusive and open nature. “We’ve taken a pretty hard line on freedom of speech, supporting our users’ creation, whatever that looks like, and that’s just not something we want to police,” Karp told Colbert at the time.

But Tumblr is policing that content. Even if Karp says they don’t want to.

And Tumblr did change its policies, even if the company wants to pretend it was just a bug and some things that needed to be “fixed.”