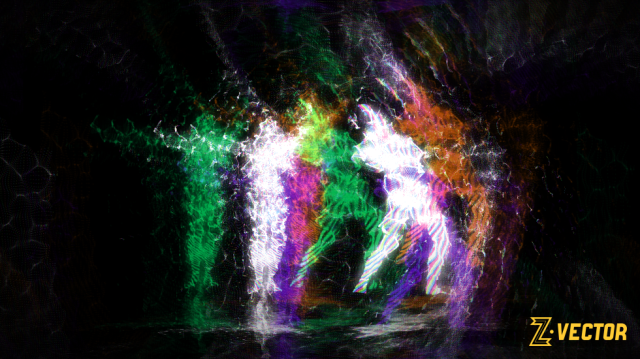 This is a bit of a niche product, but it’s still interesting nonetheless.

Artist Julius Tuomisto believes that VJs are the next DJs. Just in the same way that a DJ shepherds music lovers through a thoughtful selection of tracks, video artists can guide audiences through live visualizations that respond to music.

He and his Helsinki-based firm Delicode have created a new software platform, called Z Vector, that can take data from a Kinect or the PrimeSense Carmine to create live video feeds and visualizations that rotate around 3D forms and people captured by the camera. It’s a tool for live performances, not for programming.

You can see how it works in this music video he created with the band, Phantom.

Z Vector takes the raw 3D data from the Kinect and puts effects or filters on it like different geometric textures and lines (like in the Phantom video).

Or it also can put in distortion fields like in the video below (or particle trails and gradients, too). They’ve used it during live dance performances to broadcast visualizations behind troupes of modern dancers who have recently demoed it at the Venice Biennale, Mobile World Congress in Barcelona and SXSW.

The beta is free, but it’s a possibility that Tuomisto might charge down the line. The feed from Z Vector can also be broadcast into other devices, even ones like the Oculus Rift, the virtual reality headset that has hardcore gamers salivating and that recently picked up funding in a round led by Spark Capital.