As we shift more of our computing to mobile devices and applications, there’s also a need for a new crop of tools that help developers better build, design and test their creations, which are also specifically tailored to mobile. Newly launched, Y Combinator-backed startup Apptimize is one such service, offering a mobile A/B testing suite for both iOS and Android.

The company was founded by Nancy Hua, an expert algorithmic trader in the finance industry, and Jeremy Orlow, an ex-Googler and previous 3LM mobile security engineer, who has first-hand startup experience building apps like DrawChat. While Hua was inspired to build a startup in order to do something riskier with her life, both founders can speak to the gap in the market when it comes to current mobile A/B testing products.

“It’s not a new idea, as an idea,” admits Hua. “But it’s not been done very well for mobile, and it seems inevitable that someone would do it,” she says. “Right now, there’s just no incumbent. None of our users that we’ve talked to have ever heard of any of our competitors.”

Today, a lot of the companies offering A/B testing products are big, post-IPO businesses whose focus is on A/B testing on the web, not mobile. Meanwhile, startups like Pathmapp and Leanplum are still working to gain traction of their own, but typically target mobile game developers. There are also services provided by the likes of Amazon and Google, as well as smaller services like Twitter acquisition Clutch.io, but again, no real market leader.

Often, says Hua, companies in need of an A/B testing product simply use something that’s been built in-house, but those services aren’t usually very good.

With Apptimize, developers can instead place a small code snippet into their app then use the programmatic interface to make variations to the experiments they want to run, including which users will receive them and when. For example, developers may want to see if they increase conversions by offering a tutorial or making other changes to the first-run experience. They may want to adjust the pricing of in-app purchases or optimize the checkout funnel in some way, and much more. 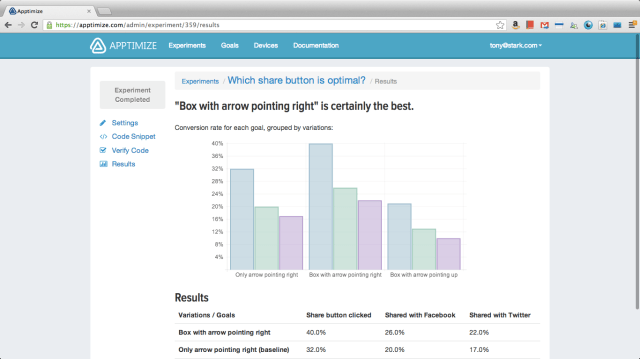 Being able to test these sorts of things without having to roll them out to a large user base only to see them fail, is also of interest to larger app publishers, the co-founders explain.

“Any developer has a lot of ideas about what might make their app better or more interesting to users,” says Orlow. “But a lot of times — especially if you’re an app with millions of users who’s established and has some revenue coming from it — you get a little bit scared to make big changes that could rock the boat.”

For these more conservative clients, there’s a need for a mobile A/B testing product that not only gets the job done, but doesn’t affect the app’s performance or cause crashes.

Apptimize lets developers load up multiple experiments that can be shipped out in one app update, and those can then be run and disabled at will without having to push out new versions to the associated mobile app stores. This feature helps those developers whose update cycles are generally longer. Enterprise customers also receive email and phone support, multiple user accounts, and, like all paid tiers, have access to the real-time results of the ongoing experiments.

The company has been testing Apptimize with dozens of developers for a couple of months, including two big-name publishers it can’t disclose, one of which is a game publisher. Today, it’s launching out of private beta and available to all who want to try it out themselves.

Apptimize is currently backed by YC and the YC VC fund, but has not yet raised a seed round.