Fresh on the heels of a spam report that painted Twitter as the network with the largest underground economy for the buying and selling of fake followers, the social network has finally taken steps to crack down on one of the tools often used by those attempting to game its service: the Auto Follow. In Twitter’s parlance, an auto follow refers to an immediate and programmatic means of following another user back after they follow you.

There’s an argument to be made on both sides of this issue.

Auto-Following Tied To Spam, Attempts To “Game” The Service

On the one hand, a portion of Twitter’s user base took advantage of auto-following in order to rapidly, and therefore inauthentically, raise their profile and their seeming popularity on Twitter in order to give themselves an air of trustworthiness they would otherwise lack. There are a number of places where you can find lists of auto-following Twitter accounts, which a new Twitter user could follow to quickly build up their “fan base.” (For example here and here.) 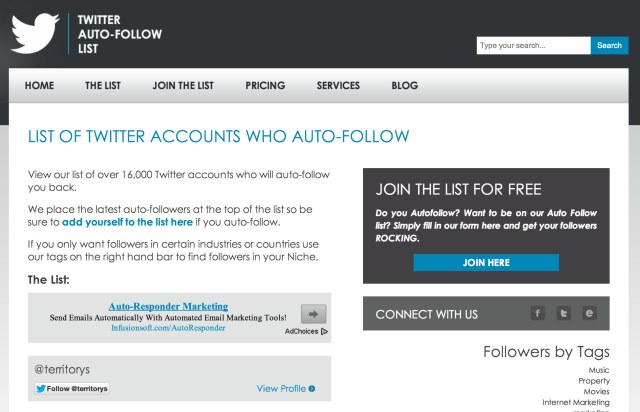 In addition, several third-party applications previously offered Auto Follow as a service, as it was permitted until late last week through the Twitter API, though it was no longer a feature available directly on Twitter itself. One such service, Twitter Auto Follow Back, even had its own hashtag (#TeamFollowBack) whose junk tweets you may have spotted in your own Twitter stream from time to time. It claims to have handled over 334,000,000 Twitter followers to date. 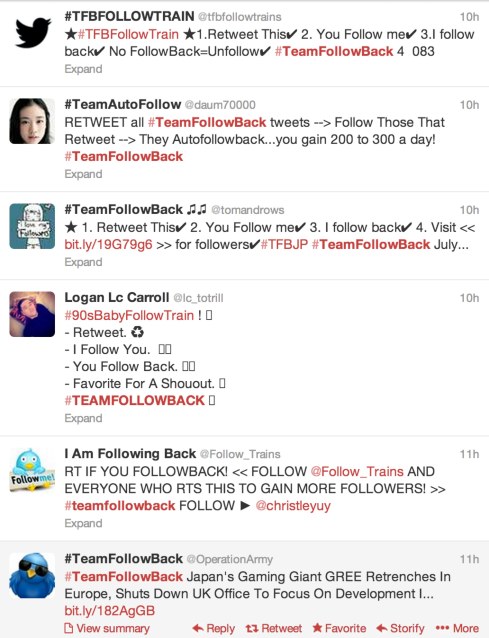 Others, like SocialOomph, for example, offer a suite of tools that help Twitter users better manage their accounts, of which Auto Follow was only one option. SocialOomph has since had to overhaul its service to accommodate the new rules. As of today, users will have to manually vet new followers in order to engage with them through other means, including DMs (direct messages) and Auto DMs, the latter of which was oddly not disallowed via Twitter’s API changes, though often more obnoxious to recipients due to their overly solicitous or spammy nature.

“Our system still automatically applies certain user-defined criteria to new followers and only presents those new followers that the user would want to follow-back for manual approval,” explained Patricia Morris on behalf of SocialOomph (via email). “The ‘undesirable’ new followers are automatically excluded, and that automated exclusion is not prohibited by Twitter’s rules.” She also referred to the change as “very shoddy and amateurish behavior of Twitter to spring this rule change as a surprise on developers with absolutely no prior warning or road map.” However, that seems par for the course for Twitter, which routinely sidelines third-party Twitter developers like those offering alternative clients, for example.

Twitter explained the decision to end the Auto Follow as being in the best interest of its users. As noted by a member of Twitter’s Platform Operations team in the comments section of the blog post quietly announcing the news just before the July 4 holiday in the U.S., accounts which engage in the immediate follow-back may find themselves with noisy timelines.

Twitter’s best practices documentation was updated to explain that consequences for abuse going forward will result in the suspension of accounts and applications. Also banned per Twitter’s Rules are the “get followers fast” applications and services. These, too, recently became the subject of investigation when a New York Times article detailed the practice an estimated multi-million-dollar industry. In the past, there was suspicion that Mitt Romney’s campaign had bought fake followers when his follower count jumped up by around 100,000 in just a couple of days.

This practice, however, has been a common means of establishing a new, high-profile account’s worthiness and authenticity, something Twitter almost necessitated due to its otherwise opaque procedures for having a Twitter account “verified” (i.e. given a seal that indicates the person is who they claim to be).

The flip side of the argument against automation is that there are a number of accounts on Twitter that use the service differently than the average user. For example, businesses and brands that want to communicate, market to, or provide support to their customers would often auto-follow their followers so they could better communicate with them privately through direct messages.

This was especially important when a customer wanted to provide the business with personal information like their name, address, phone or email. Though in theory, an immediate return follow by a business may prompt the consumer to engage with a company through a DM, in practice, users tend to simply tweet their questions and frustrations (sometimes not even referencing the business’s Twitter handle) into the air, and then are either surprised by a reply or ignored by the business in question. On the occasion a connection is actually made, the business’s rep still generally has to prompt the user to follow them so they can DM back and forth. This behavior really isn’t impacted by Twitter’s new rules.

Auto Following No Longer In Fashion

According to FriendOrFollow founder Dusty Reagan, the Auto Follow has been on shaky ground ever since the network shut off the feature on its own site back in 2009. (Yes, it used to be native!)

“They also made it clear early-on that automated unfollowing was a risky endeavor. I always kind of felt that auto-follow-back would eventually be against Twitter’s terms of service, so we never included it as a feature in Friend or Follow,” he says.

The practice remained acceptable for some time as high-profile accounts like @britneyspears would attempt to follow all their fans back. But as Twitter grew in size — today it has over 200 million monthly actives — it has become more and more uncommon. Reagan points out that even some of the most heavily followed accounts today only return-follow a small selection of their fans.

While the Auto Follow may have become unfashionable and unsustainable, at the end of the day, the fact that Twitter decided to finally switch off the feature via API is also, to some extent, an admission that its previous spam reporting system has failed. Case in point, one commenter on the Twitter blog post even suggested a crowdsourced model where users can mark Twitter accounts as being spam as an alternative to switching off Auto Follow — apparently not realizing that the feature has existed for years. 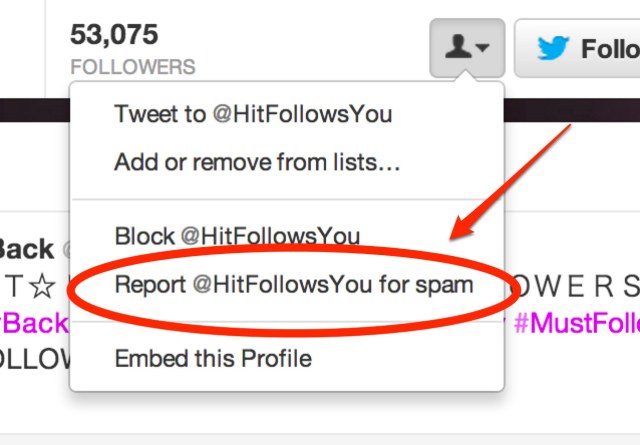 Unfortunately for Twitter, the API changes alone may not be enough to squash spammer activity entirely. Already, this unsavory group has proven itself to have a level of sophistication that at times involves mimicking real user accounts, geo-targeting capabilities, and the promise of multi-year retentions for the fake accounts they sell.

Twitter’s crackdown is merely a Band-Aid on the larger problem with the network’s design: that its users have been taught to value an easily gameable metric like follower count as one of a success, instead of focusing on the quality of a user’s content. That’s not a problem unique to Twitter, of course — it seems to be the nature of social media in general, sadly.