Wall Street Magnate is a new site that opens the market to stock trading newbies. The fantasy trading community launched last month and is packed with real-time updates and data from all major U.S. stock exchanges. The site is designed to appeal to a wide variety of users, ranging from students who want to learn more about capital equities to traders testing out investment strategies.

The site, which launched to the public at the end of May and currently has 24,000 users, was founded and privately funded by securities attorney Lewis Schlossberg and Wall Street trader Laurence Cohen.

After signing up with their email or Facebook account, each Wall Street Magnate “apprentice trader” (your status when you first join the site) gets $100,000 in virtual money and can trade stocks listed on the New York Stock Exchange, NASDAQ or the American Stock Exchange (non-U.S. stocks can also be traded through American depositary receipts (ADR).

“The thought of being a Wall Street trader is really exciting, but it seems complicated because there are barriers to entry,” says Cohen. “Lew and I talked about this and saw that there was really nothing out there that lets people trade in an easy and fun way that is also accessible.

Though there are other fantasy trading communities, Schlossberg and Cohen say Wall Street Magnate sets itself apart by offering a vast array of real-time data. A dashboard displays your portfolio’s performance, dividends and splits, shows your trading history and tracks securities you are keeping an eye on. Tabs for hot stocks and financial news (piped in from Yahoo! Finance, Reuters, CNN Money and the Wall Street Journal) and a ticker with the latest trades made on Wall Street Magnate give users the information they need to keep up with the stock market. Pop-up information boxes walk newbies through the trading process and the site avoids confusing jargon.

The site was in open beta for a year as its development team refined Wall Street Magnate’s programming to ensure that the trading stimulation and updates ran smoothly. During that time, Schlossberg and Cohen reached out to school trading clubs. The University of Illinois created a club to compete against other groups and trade collaboratively, while a finance club at Kansas State University held an internal competition on the site. 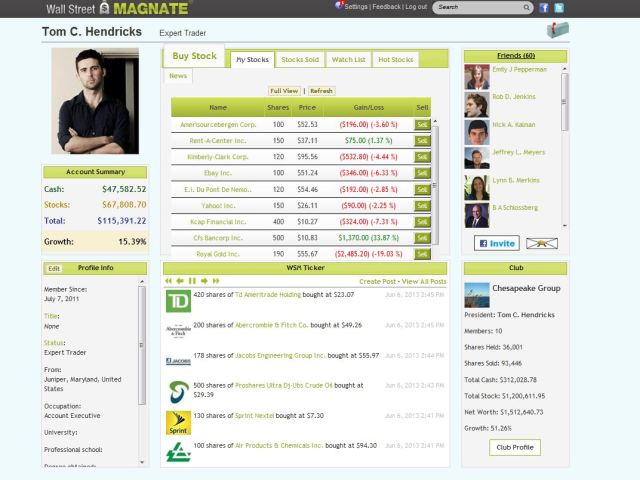 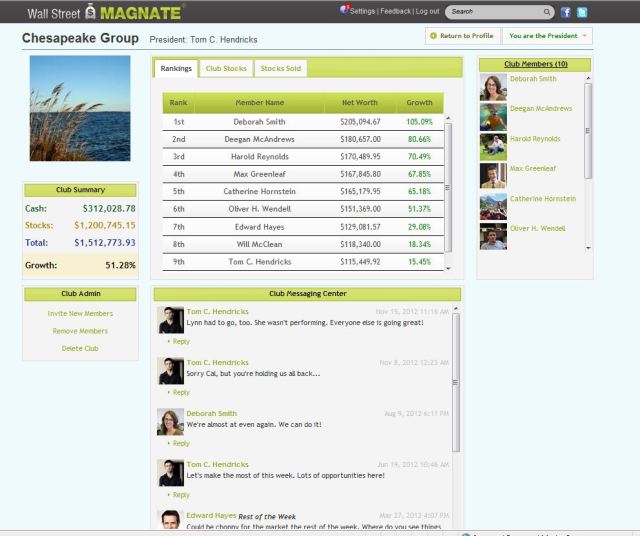 Another one of Wall Street Magnate’s features is sortable spreadsheets that allow users to track and analyze their trading history and can be exported to Microsoft Excel. The site’s founders say one of Wall Street Magnate’s beta users, a stock broker who wanted to get into the buyside, landed a new job by printing out a detailed history of his impressive history over 1,400 trades and bringing it into an interview with a proprietary trading firm.

“If you are in college and thinking about whether or not you want to be a trader, our site is one way to perfect the craft without losing money. My background is a trader on Wall Street and I lost money. That’s one way to learn,” says Cohen. “But if I was in college and had something like this to practice with, what an amazing advantage that would have been, being able to learn by trial and error without actually using real money.”