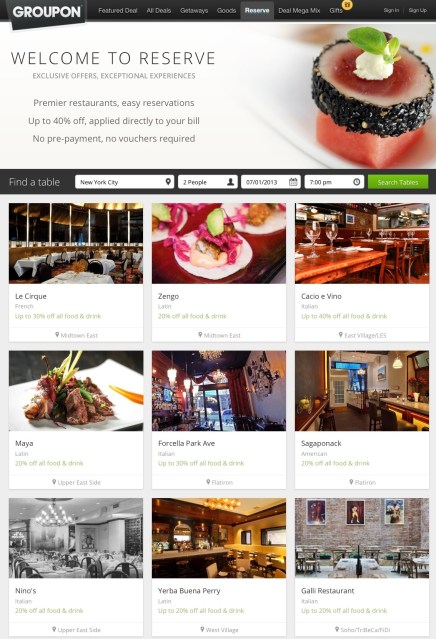 Groupon has built up a reputation for a soup-to-nuts approach to bargains for goods and services, with deals for usually expensive meals pitted against offers for cheap leg waxes. Today, however, it is launching a new product that it hopes will build up its profile among those seeking out some of the finer things, with the launch of Groupon Reserve.

From today, Reserve goes live in 10 markets: Atlanta, Boston, Chicago, Denver, Los Angeles, Miami, New York City, Philadelphia, San Francisco and Washington, D.C. The plan is to expand to more cities in the U.S. and in key international markets by the end of 2013. (That’s progress for Groupon, which up to now has been very slow in rolling out internationally services that it launches in the U.S., largely because each country, added inorganically and by acquisition, has been built on a different backend system.)

To be clear, Groupon is still focused on offering its users discounts — the first deals that will appear on Reserve include 40 percent off meals from a selection of fine restaurants from Savored.com, a restaurant reservations portal it bought in September 2012. The aim, however, is to court consumers who are looking for the “finest things to eat, see, do and buy,” thereby potentially grabbing sales with higher margins.

“Groupon Reserve is an important step in our journey to become the leading marketplace for online deals, where consumers can come to Groupon and discover great businesses at unbeatable prices,” Groupon CEO Eric Lefkofsky said in a statement. “As Groupon has evolved, we’ve seen growing demand from our customers for upscale offers and exclusive experiences. Reserve gives the most prestigious brands a new way to reach our large and desirable audience.”

Groupon says that over time, Reserve will expand to include deals from spas, salons and hotels — presumably those operating specifically in the five-star bracket.

The Reserve deal will be a step ahead with Groupon in another respect, as well. It’s furthering the idea of creating offers for users based on reservations and not upfront payments, which are not the norm among those who, for example, regularly eat at Michelin restaurants. It will also mean that the businesses setting deals through the system can offer more flexible offers and pricing to users. This is something that smaller competitors like Pirq have also pushed ahead in doing to better target bigger spenders, and more high-end establishments. For their part, high-end businesses have been slower but are now, like their less expensive counterparts, trying to utilize e-commerce innovations better to manage yields and footfall in their bricks-and-mortar businesses.

“Whether it’s because of a slow night or a last-minute no-show, even the best restaurants have empty tables,” Lefkofsky continued. “Reserve provides these businesses with a yield-management solution to bring customers through their doors at the times they need them the most.”