A little over a month after Yahoo partnered with Twitter to beef up its homepage news feed with relevant tweets from news organizations, the company is today announcing a major makeover for one of its flagship properties, Yahoo News. The updated Yahoo News site is has been redesigned with a more modern look and feel, to better fit in with Yahoo homepage’s new look, introduced earlier this year. But the bigger improvements are the less visible ones.

At the time of the homepage revamp, Yahoo said that the most notable change was not the homepage’s appearance, but rather its increased emphasis on personalization. The same, apparently, holds true for the new Yahoo News site. Although at first glance, users will just notice its cleaner, less dated look, the focus here again is on personalization.

The news stream is now customizable, so users can tell the site what kind of news they’re interested in seeing. You’ll notice that every story now has an “X” next it when you hover over it, and when clicked you can indicate why you don’t want to hear more about that story in more detail by clicking the topics associated with that particular news item. 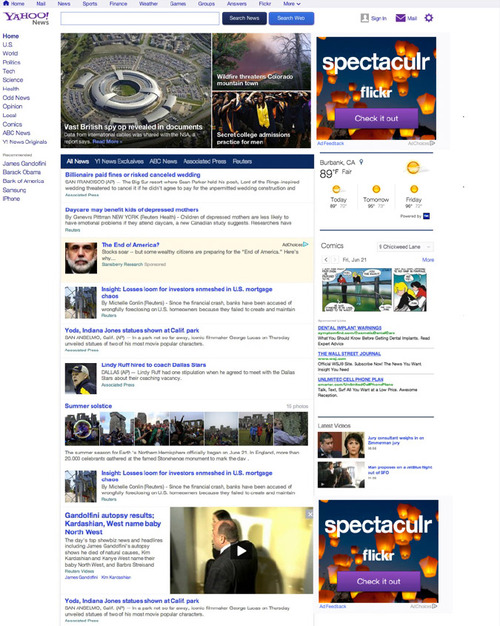 For example, after clicking the “X” over a story about the Hernandez homicide investigation, the message reads “show me fewer stories about” and then provides a list of choices including “sports & recreation,” “football,” “Aaron Hernandez,” “National Football League,” or “New England.” Even if you don’t drill down into one of those choices, after clicking the “X” the story will become hidden from the news feed in a few moments.

Though seemingly a minor thing, the fact that Yahoo News is pulling out the major subjects involved in a news story like this indicates there’s some more serious technology under the hood, like semantics. We saw Yahoo use similar customization and personalization techniques when it debuted a new Yahoo iOS app in April, which took advantage of Yahoo’s $30 million acquisition of news summarization startup Summly. The app also allows users to select topics that interest them, as well as flag those that do not – choices that are synced across platforms when users are logged in with their Yahoo IDs.

As with the homepage update, where the site adapts to learn users’ preferences as they click, the new Yahoo News will also learn of your interests based on the stories you click through to read, even if you never explicitly tell it to stop showing you items by clicking the “X.”

The updated News site is also described as faster and better organized, so you can more easily click to the categories of interest like “science,” “politics,” “health,” etc. It now features Yahoo partner content like ABC News more prominently, as well.

The redesign is also arriving on iOS devices, and soon on Android, too. The roll out is starting now for U.S. users, and will complete in a couple of days.