A replacement for your Android smartphone’s dialer (you know, the phone) may not sound revolutionary, but a new app, called simply Dialapp, wants to change your mind about that. From the makers of quantified self/personal assistant Friday, Dialapp organizes your call log first by those you want to call right now, then beneath that offers the traditional timestamped history of the calls you’ve answered, placed, and missed.

“The call history tab has been in phones for over a decade now,” explains CEO Narayan Babu. “But it is the most unimaginative way to put list of people to call. I am not going to call the pizza guy again after I called him and got my order,” he says. 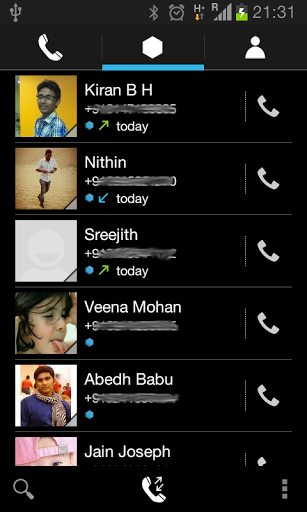 The idea with Dialapp, and the other “applets” from Dexetra, the startup which raised a small Series A round from Sequoia Capital (India) and Qualcomm Ventures earlier this year, is to make our smartphone-based personal assistants and other apps more personalized and predictive. With Friday, it does this by keeping a history of your communications and activities, including calls, texts, emails, photos taken, and more, and combining those with other events your phone records, like your location, time of day, or events like battery drains, for example, as well as with data from third-party services like Facebook or Foursquare.

The end result is an assistant which can answer questions like “who did I text yesterday?,” “who called me in New York?,” or “where did I call John last?”

On top of this platform, other standalone apps like Dialapp, or the company’s previously launched travel diary Trails, can tap also into that data. In Dialapp’s case, it can then make smarter predictions about who you’re about to call.

“The back-end is powered by Friday,” says Babu. “So over time – start seeing it getting intelligent within three to four days – it learns what your talking patterns are based on your location, time, etc.” He adds that if you already use the Friday app, then Dialapp can also use data from Foursquare, Twitter, Facebook, and more to better understand who you talk to in which context.

The app has been in beta testing for a couple of months, but is now live in the Google Play store here.

Sorry, iPhone users, this is not something that would work for you. I mean, really, you can’t even replace your keyboard, you know?