Children are our future, and VCs are giving them the cash to make it happen. Dylan Field, one of Peter Thiel’s 20-Under-20 fellows, just raised $3.8 million for his startup Figma according to an SEC filing. Field declined to talk with me about Figma, but the Thiel Fellowship site says “Dylan is building a browser based photo editing tool.”

The raise comes as Snapchat, whose founders average out to age 23, just picked up a $60 million Series B round and cashed out $20 million in stock themselves. It’s looking like Silicon Valley has a new love affair with kids. Wait, no, that sounds terrible. But after Josh Miller’s essay on “Tenth Grade Tech Trends” went viral, there seems to be more confidence than ever in the youth’s ability to predict changes in the technology landscape.

Dylan may be young, but he’s already got a ton of experience in tech. The California native has worked at Flipboard, O’Reilly Media, Indinero, Microsoft Research, and LinkedIn. He’s currently stopped out of Brown where he was studying computer science and math.

The opportunity Dylan sees is in making creativity tools more accessible. Media-capturing devices like camera phones have proliferated, giving way to apps like Instagram for quickly turning mediocre shots into art. But more advance photo editing tools are typically reserved for professionals or at least serious hobbyists, and many operate as clunky desktop software. 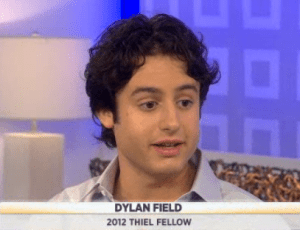 Beware, Figma could be doing something else as Dylan declined an interview, saying he’s not publicly discussing the company yet. But here’s what he said he was working on when he appeared on the Today Show last August:

“So the idea is to basically let people express themselves creatively online. So I think everyone has this inner artist, and we suppress that artist because our taste is so high but our skill level is a little lower. But I think the delta between that can be changed, fixed with technology. What we’re doing immediately is an in-browser photo editor.”

If that’s still the plan for Figma, Field would be competing with independent apps like Pixlr and juggernauts like Google+’s new photo editor. Whatever he does, he’ll have $3.8 million in equity financing to show the adults what’s up.