Google Voice remains a pretty useful service if you want your voice mails turned into text messages. However, it’s ability to do so accurately is a little hit and miss. Indeed, there are numerous websites that contain hilarious Google Voice transcriptions, often on Tumblr blogs. Plus, Google Voice is only available in the US. VoxSci is a service which has been operating for a while in the UK, but has now launched an iPhone and Android app to do what Google Voice does, but for the rest of us outside the US. 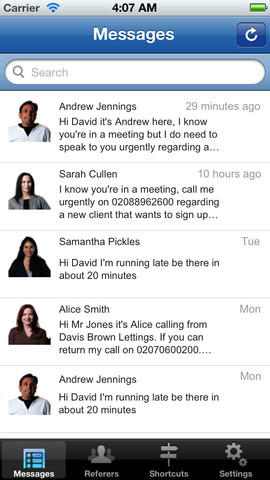 VoxSci converts the first 50 characters of your voicemail for free, however the user can listen to the entire voicemail within the App. If the user wants the voicemail fully transcribed they will need to subscribe. To get the whole voicemail converted to text costs £5, £10 or £25 per month with payment charged to an iTunes Account on the iPhone.

VoxSci has a number of useful features including voicemail search and you can respond; by text, email or call. There are numerous other features.

Alternatives like Hullomail charge for all messages to be translated, but it is quite a bit cheaper – £1.99 for all voice mails per month, versus £4.99 a month for 30 messages from VoxSci.

VoxSci uses a hybrid system to transcribe voicemails. That means they dealt with partly by software and partly by humans. Founder Ken Blackman says “We use a variety of locations but always conform to EU directive 95/46/EC [the Directive on the protection of personal data for people in Europe.]” Hullomail uses Nuance for their transcriptions, but voicemails are not passed outside the UK, so they too are compliant.

The main difference between the VoxSci service and Google Voice can be summed up in one word: quality. It’s by far the most accurate voice to text service I’ve come across and is worth checking out.