Have you ever wished that you could record something that already happened? Your kid’s first words. That perfectly timed comeback. The email address your boss told you to have those important documents sent to within the next 10 minutes. If only there was a way to record the important bits of your life, without having to record all of it.

That’s the idea behind Heard, a new app for iOS. Heard constantly records the audio around you into an ephemeral, self-destructing buffer, saving only those fleeting moments that you deem worthy.

Once you open Heard, it immediately begins recording everything within earshot of the iPhone’s microphone. Rather than dumping all of that audio into one incredibly boring and incredibly long file, though, Heard records into a constantly rotating buffer. If something happens that you just have to save, you pop into the app and tap a single button — boom, it’s saved. Do nothing, and the buffer is erased, that audio instantly disappearing into the digital ether.

Heard will continue to record audio even when running in the background, albeit with a big ol’ red “RECORDING” banner placed up at the top of your screen.

Once recorded, clips can be named, tagged, emailed, or shared on Facebook. 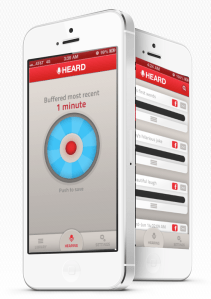 Heard just launched late last week, and they’re testing a freemium model to begin with. Out of the box, the free app records up to 12 seconds of the past — not a whole lot, but enough to help you wrap your head around the concept. Pay $1.99 for the “Bigger Audio Buffer” in-app purchase, and you can bump the recording buffer up to 30 seconds, 1 minute, or 5 minutes.

Now, before you shout “OH MY GOD, SPY APP, NSA PRISM AGH!”, think about it: if someone is actively trying to record you saying something incriminating, this wouldn’t be a very good app for it. It would offer no advantage in that case over iOS’ built-in Voice Memo recorder — which, like this app, can record while running in the background — or even a cheapo tape recorder, but multiple disadvantages (the five minute limit, the need to tap the ‘save’ button without anyone noticing). Still, anyone using the app should always make sure everyone being recorded is fully aware; in some states, not doing so could get you into sticky legal situations.

You can find Heard in the app store, for free, here.