“Alright”, “Yes”, and the much-hated “k” just got a visual redesign. Facebook’s iOS and Android apps have rolled out the option in messages to reply with a one-tap thumbs-up Like button sticker. It’s a highly-functional flourish that replaces the greyed-out Send button when you haven’t typed anything. And while it seems simple, I’m finding it quite satisfying.

Facebook confirms with me that the “Like Reply” button, as I’m calling it, was “part of a recent update”. However, it doesn’t appear to have been included in any of the “What’s New” release notes. That meshes with my suspicion that Facebook sometimes adds new mobile features and either doesn’t announce them, or notes them a few updates after they appear. Cheeky. The Like Replies are now available in Facebook and Messenger for iOS and Android, plus m.facebook.com, but not on desktop.

Update: Path 3 had this feature first. It was included in the Path 3 update a few months ago. Path design uses a checkmark which I find to be a lot more ambiguous than the thumbs-up. Still, considering Facebook also added stickers soon after Path did, there may be a fast-follow trend emerging.

Stickers have blown up recently as people search for quick and vivid way to share emotions while mobile messaging. But usually you have to dig those out of a menu. Meanwhile, texting was built for efficient communication. One of the most common things you have to communicate is an ‘affirmative’. Yes to whatever you just said. I agree. I approve. I acquiesce.

And so “k” was born. A one-letter affirmative. But it still requires several clicks. To open the messaging field, to type the letter, and to send it.

But *BAM*, the Like Reply button does it in a single gesture. Facebook even has a Like button thumbs-up sticker, but this makes it instantly accessible in the right situations. The bright blue one on Android looks especially sharp. Yes, this will save you one second. But it could save you and everyone else that one second hundreds of times, multiplied by 750 million mobile users a month. Efficiency matters.

I’ve always wanted this for text messaging. Actually, not just for replies but as way to signal to people that was lighter-weight than a text message. I called it the “nudge”. A little buzz, even more subtle than an SMS. If I said I’d pick you up in 10 minutes, and you get a nudge 11 minutes later, it means come outside. If it’s late and I want to see if you’re up, I might nudge you. If I’m free to meet up with friends and want to ping a bunch of them? Mass nudge. Much less annoying than “Hey guys wanna hang out with me? I’m lonely.”

This is nice step towards my dream of openly interpretable binary communication. Try it out next time you need to confirm something via Facebook message. We’ll see if it catches on. 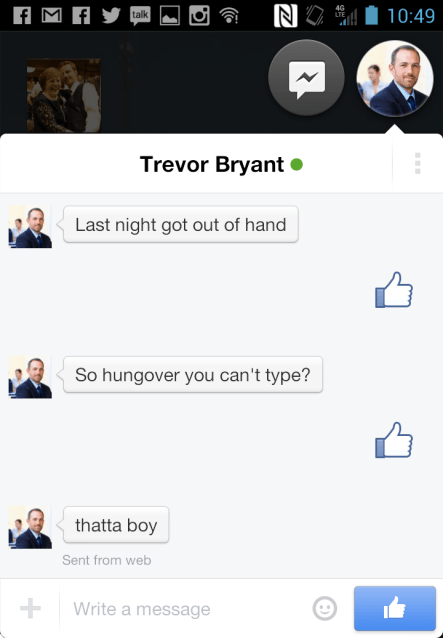