We’ve just made our way out of Facebook’s Headquarters in Menlo Park, where Instagram CEO Kevin Systrom took the stage to debut the app’s new (and not un-Vinelike) video functionality. 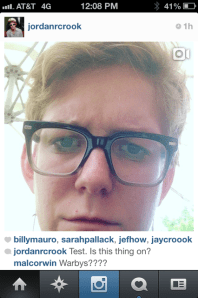 Kevin Systrom suggested on stage that they’ve been thinking about how to do video since day one — and if that’s the case, it shows. The new video functionality slips right into Instagram’s UI as if it were meant to be there.

As you scroll through your feed, videos are highlighted with a small play icon in the upper righthand corner. You can stop scrolling and hover over an item for 2 seconds and it’ll auto play, or you can tap it to begin playing it immediately. Even on the cellular connection I’m on right now, videos seem to start playing quickly, without a noticeable amount of time for buffering.

If you’re accustomed to Vine, the process of recording a video on Instagram is very, very similar: put your thumb down (in Instagram’s case, on a record button) to record, lift it to stop. Each time you do this, you create a new “segment” to your video, each of which can be deleted independently in the not-unlikely event that you mess up your video halfway through creating it. 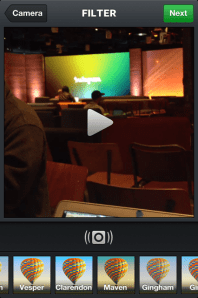 Though clearly quite similar in concept, Instagram and Vine aren’t without their differences: Instagram’s max video length is over twice as long, at 15 seconds as opposed to Vine’s 6. The videos on Instagram don’t loop, which is interesting; while looping is something that may be a bit signature to Vine, I feel like it’s a bit limiting to not at least give the user the option. Oh, and of course, you’ve access to Instagram’s signature feature: filters.

Like with photos, filters must be applied after you shoot a video — you can’t see how a filter would look in a certain environment before filming. Once you’ve got your video shot, though, filters are applied in realtime on top of the video as your preview plays back.

One big catch: while you’ve always been able to import photos from your phone’s camera roll into Instagram, you can’t do that with videos — at least not in this first version. If you want a video in Instagram, you have to shoot it in Instagram. Kevin tells me that this is largely an interface challenge (how do you make it just as simple to edit an imported video?), but issomething that they’re considering changing in future releases.

So, what do you think: will you use this? If you’re a Vine user, would you switch away?