Facebook is announcing some changes to Page Insights, the analytics tool for monitoring the performance of your Facebook Pages. Product Marketing Manager Galyn Burke told me that this is the first time the Page Insights interface has been updated since October 2011.

Now, the specific changes may sound a little arcane to folks who don’t actually use Page Insights, but Burke said the update is, in large part, a response to something that Facebook has been hearing from Page owners: “Don’t just tell me how my Page is doing. Tell me how I can do better next time.” Ultimately, if the update works as expected, businesses will have a better sense of what is and isn’t working on their Pages, so they can create better, more engaging content — and perhaps spend more on advertising with Facebook in order to promote that content.

To make that happen, Facebook is consolidating some of its metrics while breaking out others. One of the changes involves the People Talking About This measurement, which combines things like people Liking a Page, commenting on a post, or checking in to the business featured on a Page. The problem, Burke said, is that People Talking About This “includes a lot of interesting individual components,” but “when you bake them together in this pie, it’s harder for Page owners to track them individually.” So instead of combining all of those elements into one metric, Facebook will separate them into their own measurements (pictured above).

On the other hand, Facebook will be keeping its aggregate measurement for Virality, but adding clicks to the measurement and renaming the Engagement Rate.

Facebook is also making it easier to see how well an individual post performed by creating a single scorecard (pictured below) aggregating all the positive (Likes, comments, shares, clicks) and negative (hiding a post, un-Liking a page, reporting as spam) interactions around it. Burke said that previously, if a Page owner wanted to see all that data, they had to look at different pieces under multiple tabs. 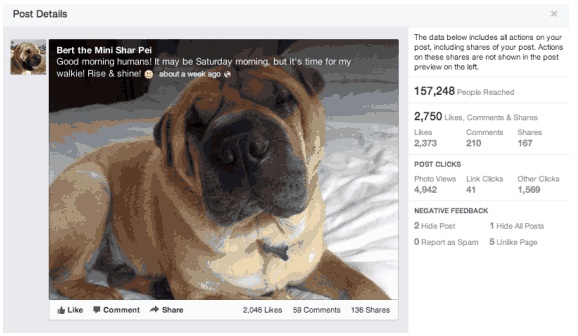 The final change that Facebook is announcing is the addition of a new report for People Engaged, which shows demographic and geographic data for not just the users who Liked your pages, but all the users who engaged with your content in some way. Burke said this is important because it helps businesses understand the audience that they’re already reaching on Facebook and therefore the other audience types that they might want to reach in the future.

Facebook has been testing the new Page Insights interface with a small group of businesses. It plans to expand that group today, but it’s still looking for feedback before it rolls the changes out to all Facebook Pages.

By the way, even though it took Facebook more than a year-and-a-half to update the Page Insights interface, Burke said, “It won’t be that long in between udpates and upgrades next time.”

You can read more details in Facebook’s blog post.