The pilot project between AT&T and the city of New York is officially called AT&T Street Charge. (DUMBO firm Pensa handled design, and Goal Zero provided the solar technology, AT&T handled the cash.) The stations will move to new locations at the beginning of July, rotating throughout the city until September. After that, we’ll see what becomes of them.

Most are a little out of the way for those who don’t go to Fort Greene Park, the Brooklyn Bridge Park, or Riverside Park on the reg, but solar powered, public, and free is a pretty great thing. Definitely better than those public charging stations that also charge you money.

Since the Union Square location won’t open until tomorrow, I headed up to Riverside Park to see what the good people of New York thought of it. If I was hoping for a rare Upper West Side mob scene — and I was — I was sorely disappointed. To be fair, it was an overcast Tuesday at 2:30pm. On a sunny Saturday afternoon when the adjacent Pier 1 Cafe is busier, I’m sure the station will be getting more love.

Joggers, cyclists, dog-walkers, and people who were otherwise not at work stopped by the charging station regularly and gave the attendant an “I’m just taking a look” or “I just wanted to see what it was” before moving on. It is a 12.5′ metal pole with six phone chargers at hip height and three arms at the top that resemble whimsical helicopter blades, so that is a valid reaction.

The most enthusiasm came from a group of 16-year-olds, who rushed the pole going, “Ooohhh, coool.” When I asked them if they’d feel safe leaving their phones there, all five of them gave an immediate and decisive no.

“Are you guys from New York?” 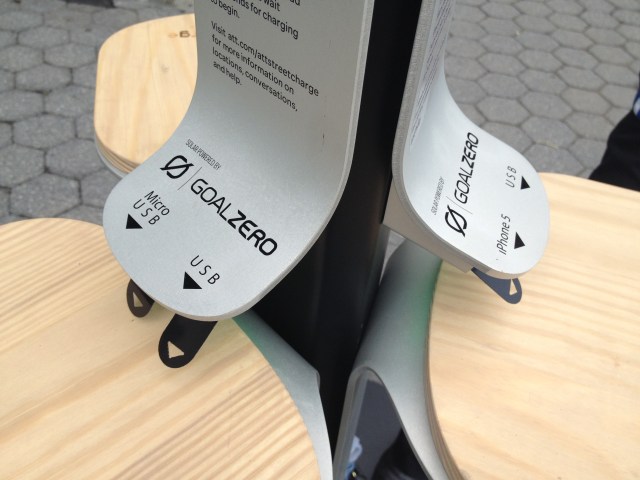 So there you go. But two of the boys did stick around for a few minutes to plug in their phones.

“It’s okay if you’re standing right next to it.”

Another man checking out the pole said that while he wouldn’t feel comfortable stepping away from his phone — “I hardly like to leave the house with it” — he could see imagine huge lines in the event of another blackout.

The attendant, who works for a company hired by AT&T for the launch, estimated that about 20 or 25 people had charged their phones on the pole in the four hours since she arrived at 11am. In the hour that I was there, only three did, teenage boys included.

A 24-year-old cyclist named Shana reclined in a nearby cafe chairs waiting for her iPod to charge. Asked if she felt comfortable sitting 15 feet away from it, she replied,

Most people seemed to think it was a great idea, especially in light of Sandy, but no New Yorker is going to leave their stuff lying around. I think a nearby Park Enforcement official put it best:

And so the charging stations stood in the June drizzle waiting for the public to stand right next to them. 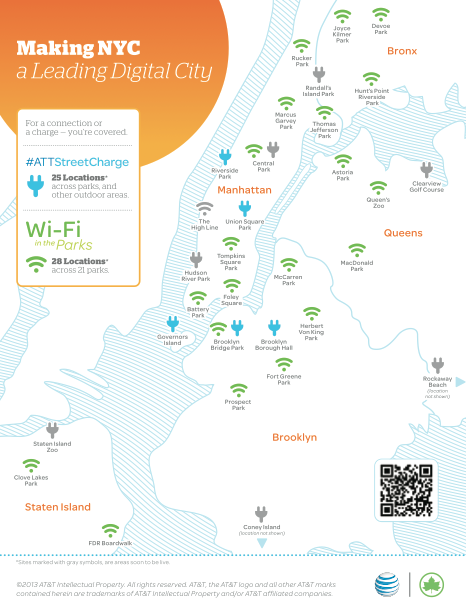