Retargeting, everyone’s favorite web advertising technology, is coming to smartphones thanks to a startup called TapCommerce. The company isn’t exactly launching today, but it has been relatively quiet, and now it’s announcing some initial advertisers, as well as disclosing a $1.2 million round that it raised last year.

Retargeting allows businesses to target their ads based on a user’s past activity. At its best, that means the ads are smarter, with a better sense of what you’re looking for and where you are in the purchase process. (At its worst, it can be creepy and annoying.) It has become a staple of web advertising, particularly for e-commerce companies, but it doesn’t work on Apple’s mobile devices because they don’t support third-party cookies.

To solve that problem, CEO and co-founder Brian Long (previously vice president of mobile at ad company Pontiflex) told me via email that he recruited a smart team including a Ph.D. from Caltech and an algorithmic options trader. He added, “There is a bit of secret sauce, but we use very large amounts of data coupled with sophisticated statistical analysis to produce extremely accurate results for retargeting.”

Long said there has been another big challenge to mobile retargeting — “mobile inventory was siloed into a few major mobile ad networks.” Now, however, TapCommerce can work through the real-time mobile exchanges “to reach a very large audience and retarget efficiently.”

In addition to its retargeting technology, the company says it has developed dynamic ad units and audience segmentation tools. 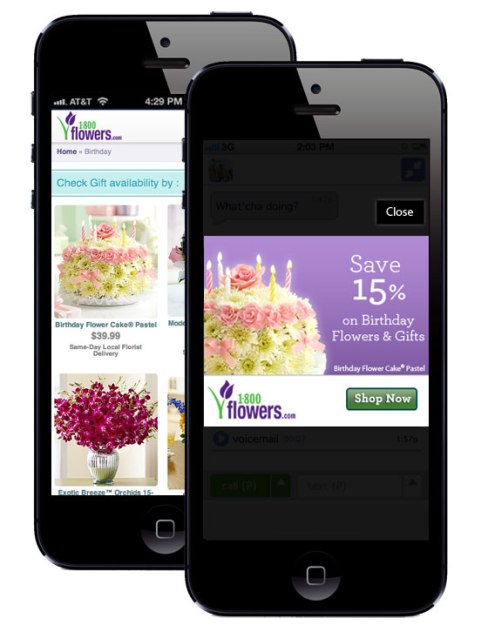 As with desktop retargeting, the obvious advertisers are e-commerce retailers, since they can use the technology to convince visitors to buy a product that they were already considering. The startup’s advertisers include JackThreads, BustedTees, and 1-800-FLOWERS.com.

As for the funding, it comes from RRE Ventures, ENIAC Ventures, NextView Ventures, and Metamorphic Ventures. Each of the firms invested a similar amount of money, but Long said he considers ENIAC to be the lead since it invested first.