Edward Snowden is being hailed as a hero by some, and now a Crowdtilt crowdfunding campaign is raising money to reward the whistleblower for his “courage” and pay his bills. The campaign doesn’t specify how the money will be delivered to Snowden, and is raising questions about if donations constitute aiding an enemy of the state.

The campaign was started by Facebook employee Dwight Crow with $1,000 of his own money. The description explains “We should set a precedent by rewarding this type of extremely courageous behavior. It’s definitely apparent that legal fees may soon be a big part of his future, but I don’t care how he uses the funds raised, whether it’s for a business-class trip to Iceland or just to pay his hotel bills, it’s a reward that I believe we shoudl [sic] band together and provide him with.”

Snowden asked to have his identity revealed by The Guardian after he leaked to the British paper and The Washington Post details and documents regarding NSA programs to monitor phone records and Internet activity of Americans. He says he’s currently holed up in a Hong Kong hotel, choosing the city because “they have a spirited commitment to free speech and the right of political dissent.” 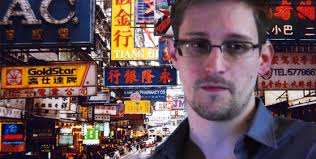 However, some worry Snowden could still be arrested and extradited to the United States. The Guardian explains that the U.S. and China have an extradition treaty where “both parties agree to hand over fugitives from each other’s criminal justice systems, but either side has the right of refusal in the case of political offences.” Hong Kong has in the past raided funds and expelled international criminal suspects. Scared to leave his room, Snowden says he’s been racking up huge room and food bills. Those in part inspired Crow to set up the crowdfunding campaign.

“Reward Edward Snowden for courageously leaking NSA docs” has been slow to pick up speed, though, possibly because of fears regarding government retribution to funders. Its originator Crow was the co-founder of the Y Combinator used car sales startup Carsabi before its team was acqui-hired by Facebook in October 2012. Crow is also known for appearing on the Start-Ups: Silicon Valley reality TV show. Despite Crow’s extensive network as an employee of Facebook (one of the companies Snowden detailed was legally obligated to provide data to the NSA), and the Crowdtilt page appearing on Hacker News, as of press time only 55 contributors had stepped forward to pool under $5,000.

Many who provided monetary support for imprisoned WikiLeaks source Bradley Manning faced no repercussions, but it’s unclear how the government would treat this situation. Without any public information on Snowden’s exact whereabouts, and his suspected weariness of communicating over the web, it’s unclear how he would claim the proceeds of the Crowdtilt campaign. Crow noted in a Facebook comment that the funding might go to Snowden’s family members. Still, this uncertainty may also be dissuading people from contributing.

Others around the web have called for a legal defense fund for Snowden, though none has arisen. A small GiveForward campaign has started to “Help Edward fight the government!” but it’s received even less support. A preemptive petition to the White House has received over 8,000 signatures in hopes of winning Snowden a pardon for any crimes committed in the act of his whistleblowing.

The crowdfunding campaign and its issues come in the middle of a debate about whether the NSA’s actions are warranted for protecting the United States and Snowden’s leaks jeopardize those efforts, or whether the NSA is engaging in a wholesale assault on privacy and liberty.