With over 600 million phone numbers in its database, WhosCall allows users around the world ID incoming calls and texts, even if those numbers aren’t already stored in their contacts list. Originally built for Android, the app is now available for the iPhone.

According to its developer, Taipei-based startup Gogolook, WhosCall’s Android version has been downloaded over 3 million times around the world and IDs and blocks over 10 million unwelcome calls per month. The iPhone release is targeted for release in Taiwan, the U.S. and Japan. 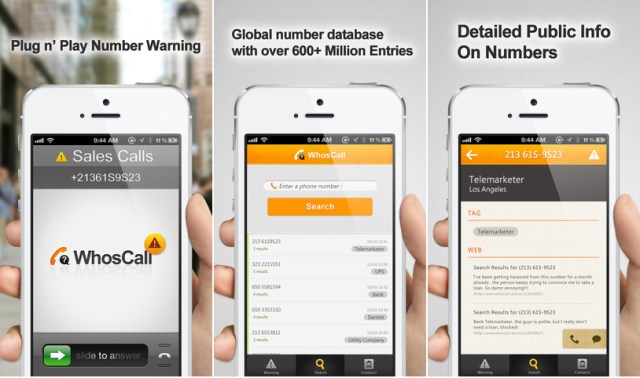 The new iOS version features reverse number search, the ability to create a blacklist of unwelcome callers and a call guard database, or a list of numbers that have been identified through user feedback and WhosCall’s algorithms as potentially malicious.

WhosCall’s database of phone numbers was initially gathered from public sources like the Yellow Pages and the Google Place API, while others were added as more people began to use the app and report unwanted callers.

“Crowdsourcing has become the major way we get malicious numbers for our blacklist database,” says Jeff Kuo, the CEO and co-founder of Gogolook.

Based in Taipei, Gogolook was officially founded in April 2012, but first started three years ago as the project of three friends who started working together part-time to develop Android apps, says Kuo. One app was designed for real estate salespeople to get real-time information, while the other was the first version of WhosCall.

During WhosCall’s first year on the market, it rapidly gained traction around the world, including in the U.S., Taiwan, Japan, Korea and Middle Eastern countries like Saudia Arabia, Kuwait and Egypt. The success of WhosCall enabled its developers to launch Gogolook, which now has 10 employees. The startup has raised about $500,000 in angel funding and is backed by Trinity VC.

The iOS version of WhosCall is available at an early-bird price of $0.99 through the weekend. Afterward, it will be sold for $4.99.