Tango, a mobile messaging and video calling app with now over 120 million members worldwide, is expanding its service by opening its platform to third-party developers. By integrating the newly launched Tango software development kit (SDK) into their own applications, mobile publishers will be able to add a social layer into their apps meant to better reflect users’ real-world connections with family and friends. Gameloft is the first of a dozen or so launch partners to debut apps using the new Tango platform. 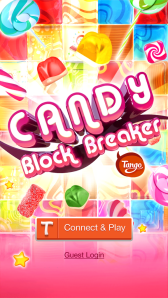 Gameloft will soon be releasing an app in called “Candy Block Breaker for Tango” on iOS, and that will be then followed by “JetPack Jinx for Tango,” developed by Bubble Gum Interactive.

This is a major move for the mobile social communications service, Tango, which has been steadily transforming itself from just a video calling app to rival Skype into something that more closely resembles a mobile social network. Already, users could call, video chat, text, leave voicemails and video messages, and even play games within Tango’s mobile application, but this is the first time the company has made access to its so-called “social graph” to other applications.

According to Tango CTO Eric Setton, Tango users have been playing tens of millions of games within the app every month – something that would see the app ranked toward the top of the app store charts if it called itself a mobile game, he says.

“But we found that we can’t do everything we want to inside the app, in terms of putting out the most compelling content out there and presenting it to our members,” Setton explains, “so we basically becoming a bottleneck.” 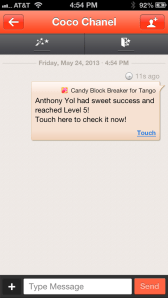 With the new Tango SDK, the idea is to create an experience that’s more like playing games in the real world – like during a family board game night, for instance. However, though the initial partnerships are on the mobile gaming side of things, Tango’s SDK will be open to developers of any kind of app looking to add a social layer.

The SDK allows the third-party apps to connect with its network, pull down a list of friends, and then allow those users to message each other using text, picture and video, similar to how things work in Tango itself. It also includes social leaderboards, which shows how users’ scores compare with friends, and it allows for both competitive and collaborative in-game mechanics. For example, app developers could allow you to see where your friends are within the game or they could allow users to chat and play at the same time. The integration specifics are up to the third-party developers.

When users try out a Tango-powered mobile app, they’ll be prompted to tap a “play with Tango” button to get connected. The nice thing about the integration is that there’s no extra typing required here. Unlike Facebook, where users maintain a username and password, Tango does not. The app has historically registered users based on their phone number, and added “friends” based on who had that same number in their contacts book. 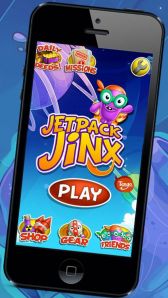 In recent weeks, I’ve found that system problematic because there’s no way to block users, but Setton assures me that feature is works. As it stands, however, if your phone number is more public, you could encounter issues where unknown users contact you, and you have no way to avoid those alerts. With the third-party applications, those alerts will take you directly into the mobile app or game itself, or, if it’s not installed, will prompt you to download the app when the notification is tapped.

Game developers, who will do a revenue share with Tango, have given the SDK a warm reception so far says Setton, because of its potential for increased app discovery.

“The app store is so competitive. If you look at the top 100 grossing apps, more than 75 percent come from the mobile gaming industry. There’s just very, very fierce competition there,” he says. “The other channels to get noticed in the app store are mobile advertisement or the Facebook platform, and the prices for these keep going up. By connecting [third-party developers] with a pretty large user base on our end and by helping them get discovered, we think that we’ll be able to preserve the economics in a way that makes sense.”

Interested developers can apply for access to the Tango SDK from the company’s homepage. The iOS games releasing first will be available on Android next month, and more games and other apps will follow in months ahead. Setton says that Tango expects to have anywhere from 30 to 100 games out between now and year-end.