Turkish authorities have arrested 25 protesters for the high crime of using Twitter. Amid widespread violent clashes, police rounded up netizens on Tuesday night for “spreading untrue information.” Embattled Turkey Prime Minister Recep Tayyip Erdoğan has labeled social media “the worst menace to society,” saying of Twitter, “The best example of lies can be found there.”

Social media has been an essential tool for Turkish protesters to skirt the tight-lipped government-run media. “The Turkish media should be ashamed. For the past 48 hours, the people have been waging a struggle and you have not reported anything about it. Shame on you,” said Fatih Akin, a prominent Turkish film director.

Indeed, over the weekend, government-run newspaper, Sabah, splashed the front page with a story of the Prime Minister receiving an award for combating smoking and made no mention of the country-wide protests that have been front-page headlines around the world.

Below are a few of the Vines and Instagram photos that protesters have shared of the harsh government crackdowns and large student uprisings. 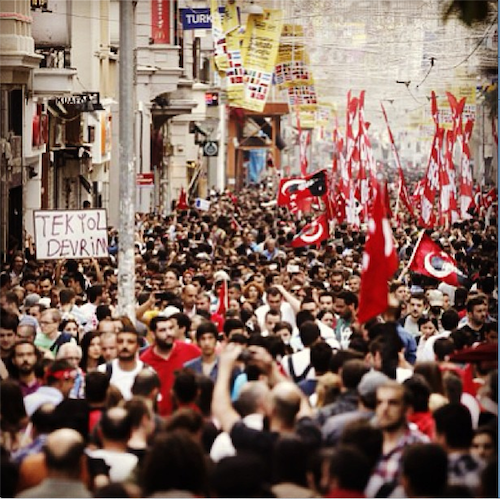 Research by NYU Politics Ph.D. candidates Pablo Barberá and Megan Metzger have found that, unlike past protests such as Egypt, nearly all of the geo-located tweets are coming from within Turkey (90 percent). In other words, social media is a tool for the protestors themselves, not just a medium to show solidarity from citizens abroad.

And the protesters seem to be making friends in the hacking community. Early reports show that the hacktivist collective Anonymous and the Syrian Electronic Army, infamous for its hacks of several mainstream newspaper Twitter feeds, have joined the fight and have attacked Turkish government websites.

This is an ongoing story, and we’ll update as more information comes in.