In 2011, Steve Schoettler left Zynga, the company he had co-founded four years earlier, to devote himself to a new project, called Junyo. With interest in education technology beginning to take hold, Shoettler and his co-founders at Junyo set out to leverage the growing capabilities of Big Data tools and analytics to tackle some of the deep-seated problems in K-12 education. Chief among those was using data to help schools get a more complete picture of student performance, along with helping schools to answer an important question: What should we teach students next — and how?

While the startup’s blended learning software attracted nearly a dozen schools, Junyo soon found itself trying to solve too many problems at once. The archaic infrastructure and lack of data standards meant that, to build the most effective solution for its partners, it would be biting off more than it could chew. The company decided to grit its teeth and change direction, even though a few of Schoettler’s co-founders would take flight in the process.

This week, Junyo launched its new, flagship product and its first release since its pivot last summer, which sees the company moving in a decidedly more “business-to-business” direction. The new product, called EdLights, is a marketing intelligence platform that aims to help publishers and the litany of school supplies companies better identify and reach the right customer and audience.

Essentially, EdLights aggregates and parses the enormous amount of publicly available data on K-12 schools (it’s now using over 100 data sets) to deliver those diverse datapoints in a simple user interface that schools and marketers can understand. By building collections of data points on nearly every public school in the U.S. and making those collections easily searchable, Junyo wants to help both schools and the vendors that serve them (which have increased nearly one hundred-fold over the last five years, Schoettler says) get a more comprehensive picture of the education market.

To do that, EdLights allows vendors and marketers to search for information at both the district and school level, along with providing them with the ability to drill down into state and school funding, budgets, census and demographic data.

All in all, this means EdTech companies and school suppliers have access to 650 district and school data points, which aim to help them identify market opportunities across 55 funding categories and 57 expenditure categories that break down where money is budgeted and spent. The new service also comes with mobile access in a web app customized for tablets and mobile devices.

To further up the incentives for vendors over competitive tools, EdLights gives users the ability to save searches, filter by location, student population, revenue, funding, view prospects on a dynamic map and create target lists. The other potentially big draw for its target audience: The ability to be more effective in outreach to prospective customers, as its database contains contact information for over 1.7 million people in K-12 education, from administrators to teachers, including name, title, address, phone and email, when available. 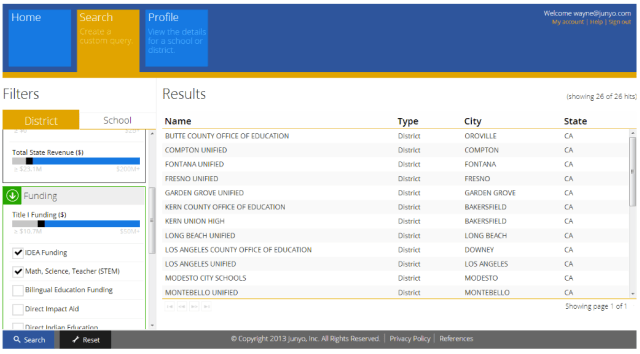 With its new tool, Junyo is going after a wide range of education service providers and vendors, from big publishers like Pearson and McGraw Hill to the bevy of young EdTech companies that have emerged over the last year. Many of these startups naturally don’t have the kind of well-developed relationships with administrators and districts, putting them at a disadvantage when compared to the big, more senior players. These companies spend a lot of money building sales teams and pounding the pavement trying to get their products into the hands of teachers and schools that would benefit from their products and services.

Schoettler gives the example of a startup selling a Math product, which by using EdLights, would be able to search for schools that have Title One funding and low Math scores. By searching through the database, they would be able to identify schools that are analogous or similar to other schools or customers with which they’ve already had success. Junyo also offers a handful of other products, like a sales marketing tool, which sales reps at the Math startup could then access for a monthly subscription to launch targeted marketing campaigns and compile relevant contact data.

While Junyo isn’t actively targeting schools with EdLights, Schoettler sees the product as potentially having relevance to educational organizations or institutions as a way of comparing performance to other schools and districts with similar demographic profiles. For example, administrators could use the platform as an analytics tool to measure the effectiveness of certain software or the benefit of introducing particular student response systems or learning management products into the classroom. 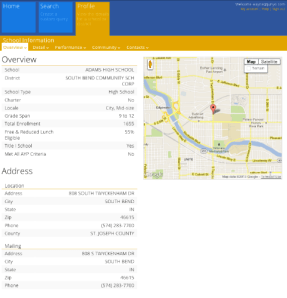 While there are information vendors like MDR that sell this kind of market data to schools and education companies, Junyo hopes that it can compete head-to-head by offering a product at a significantly lower price. Companies like MDR typically charge lofty fees for access to its service, so Junyo plans to undercut them by offering its data in three subscription packages. The first, “Prospector,” will run $79/month, followed by a $4,000 enterprise version and lastly a version that comes at an undisclosed price and offers full access to names, addresses and more for school employees.

As of launch, EdLights has 30 customers on board, and as a result, Schoettler says the company is “already on track to profitability” and expects Junyo to be cash-flow positive at the beginning of 2014. Down the road, the founder sees the potential to build on its new foundation to offer more complete and detailed insight into demographic information and the like, and even begin tailoring its product to a higher education audience.

The most frustrating thing for education companies is that there are fewer publishers every year, but more and more EdTech companies, Schoettler tells us.

The biggest problem these companies face is getting their products into the classroom, where students and teachers can benefit from this amazing technology they’ve built. In turn, schools are hungry to find the latest and greatest education products to help personalize instruction and achieve better learning outcomes. We want to help organize all this information so that both sides can benefit.