Segment.io, a Y Combinator-backed startup making it easier for developers to integrate APIs from multiple analytics providers into their applications, is today expanding its service to include support for mobile. The company is introducing mobile software development kits for both iOS and Android, which will allow developers to toggle on or off 25 different analytics services without resubmitting their apps to the various app stores.

At launch, Segment.io’s iOS and Android libraries will support sending data to a number of mobile analytics services, including Countly, Mixpanel, Localytics, Flurry, Google Analytics and others. Co-founder Peter Reinhardt explains that the new libraries will give mobile developers flexibility, because they’ll now be able to deploy the Segment.io analytics library just once, then switch on or off the services inside Segment.io that they want to work with. 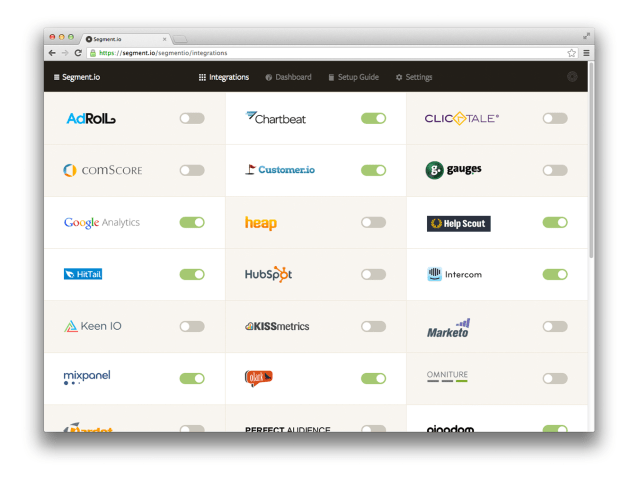 In addition, by proxying the data through Segment.io’s servers, the libraries provide mobile developers for the first time with access to Marketo, HubSpot, Customer.io, Vero, Klaviyo, Pardot, Woopra, Help Scout, Librato, Outbound.io and Salesforce. In the months ahead, the company will add support for dozens of analytics services, including USERcycle, Userfox, Web Trends and Omniture, for example.

Launched this January by former MIT roommates Reinhardt, Ilya Volodarsky, and Calvin French-Owen with designer Ian Storm Taylor, Segment.io grew out of the team’s earlier efforts in building a library called analytics.js, an open source tool still available on GitHub. Though they had originally been focused on building a KISSmetrics or Google Analytics competitor, after watching the open source version take off, the founders decided to meet demand by focusing on a simple analytics API for developers instead.

With Segment.io, the idea is to offer a single API that works across all providers. The service supports integrations with Chartbeat, comScore, Customer.io, Foxmetrics, Google Analytics, KISSmetrics, mixpanel, Quantcast, Perfect Audience, Uservoice and many more for free, plus access to premium (paid) integrations including HubSpot, Marketo, Omniture, Pardot, Totango, and Salesforce to drastically cut down on development time.

As Reinhardt explained to us earlier this year, each API out there is slightly different, so businesses want to use them for different things — one for tracking referrals, another for custom event tracking, and a third for targeted emails, for example. Developers then get stuck trying to figure out all these APIs, which is time that could be better spent working on product.

Since January, Segment.io has grown from 60 sites using its service, to thousands today, and Reinhardt says that during that time, API call volume has grown from 60 million per month to now over a billion in May. “We processed as many events today as we did in all of January,” he tells us.

Like Segment.io’s previously launched analytics API, pricing for mobile is freemium-based, with access to a number of free integrations up to 1 million API calls for free, then tiered access afterwards for more calls and/or business integrations. Interested developers can sign up here.

Segment.io is backed by $600,000 in seed funding from NEA, General Catalyst and other angel investors.