There are a number of password management solutions on the market today, but CommonKey, a new browser extension out this week, has a different take. Instead of focusing only on the needs of the individual user or offering a complex solution for the enterprise, it provides a password management system which allows small businesses the ability to share passwords securely across a team. 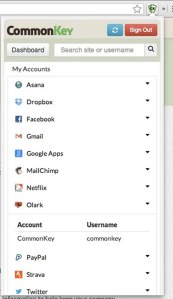 The bootstrapped, Baltimore-based startup was co-founded this October by Andrew Stroup, a civilian engineer who currently works at the Department of Defense, and Michael Cohen, whose programming background is in the medical sector. Obviously, both of these industries involve a deep awareness and understanding of security and privacy.

Stroup today works in the realm of countering weapons of mass destruction, and no, he can’t talk much about his work there.

But he can talk about the fact that he’s also now appearing on the Discovery Channel’s “The Big Brain Theory” show (get it? brain not bang?), which he had signed up for prior to having the idea for CommonKey. Filming has since wrapped, but the show ate into a couple of months’ time back in the early days of the company. He explains interest in being on the program was personal, describing it as “nerd heaven,” and equating it to a “Top Chef for engineers.”

During the competition, Stroup got to build robots, basic missile defense systems, and designed a system to protect the payload on the back of the truck, among other things.

“It was tough for me to step away,” he says of the experience. “But it was one of those things where I left college being told that I would never be able to design, build and deliver a system from cradle to grave again, and the show was an opportunity to do that eight times. And part of the reason why CommonKey attracted me, too, is that I was able to start that process over again – starting an entire idea from two guys, and then seeing that all the way through.”

CommonKey has launched as an extension for the Chrome web browser, but the plan is to soon bring it to Firefox, Safari then to iOS and Android as a mobile app. It works a lot like any other password manager available today, except that in its case, a business owner can create an organization and groups within that organization (e.g., PR, marketing, development, sales, etc.) in order to securely share common passwords among the team.

Users establish their own CommonKey accounts, which they can also use for one-click logins to personal services like Facebook, Twitter, email or anything else that’s not work-related. In fact, the service works just fine if you wanted to use it as an individual, and will also soon include a feature that automatically generates strong passwords for you, too. 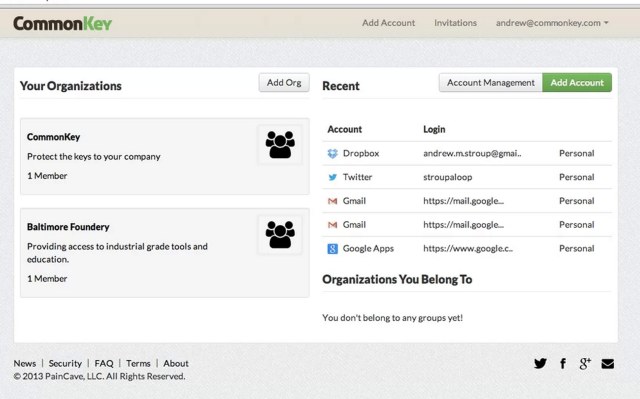 However, when added to a team, users then gain access to company accounts, all of which are available in the same drop-down box.

Stroup says he got the idea after spending time engaging with tech startups, and seeing how they shared their accounts among the team.

During its beta period, CommonKey’s service is free, but the plan is to eventually charge companies based on number of employees with access to shared accounts. Pricing has not yet been set, though.