Lambda Labs, an early-stage startup out of San Francisco, is preparing to release a facial recognition API for developers working on Google Glass apps. The API will be available to interested developers within a week, company co-founder Stephen Balaban says. The move comes on the heels of a Congressional inquiry into Google’s new wearable technology, which is still very much in the prototype phase.

The startup’s facial recognition API, launched into beta last year, is already used by 1,000 developers, including several major international firms. It now sees over 5 million API calls per month, and is growing at 15 percent month-over-month. Balaban also says that the company has been cash-flow positive since November.

Now that same API has been tailored specifically for Google Glass apps to enable both facial and object recognition. 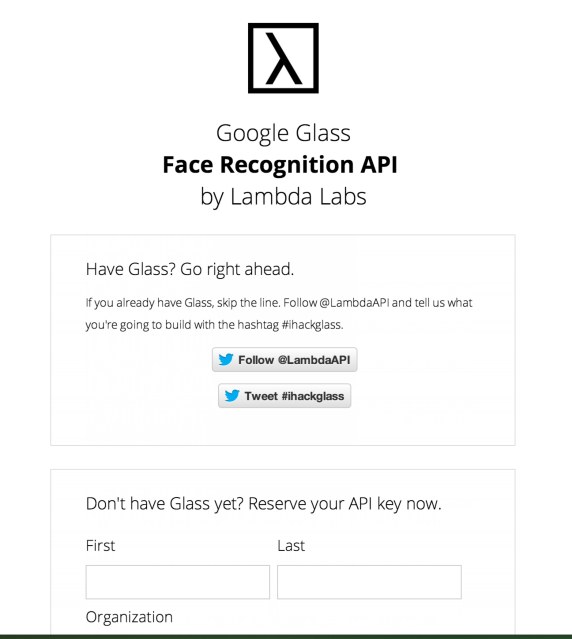 Applied to Glass, the technology will enable apps such as “remember this face,” “find your friends in a crowd,” “networking event interest matching,” “intelligent contact books,” and more, Balaban explains. (You can see what apps developers are tweeting about here.)

As potentially amazing/horrifying as that technology sounds, any apps using the technology couldn’t do so in real time – that is, you couldn’t just walk around automatically recognizing people you see through Glass. The way Google’s Mirror API works right now is that you first have to snap a photo, send it to the developer’s servers, then get the notification back. The lag time on that would be several seconds at least, and would depend on how fast you could take a photo and share it. A forthcoming Glass software development kit (SDK), though, may change that.

“There is nothing in the Glass Terms of Service that explicitly prevents us from doing this. However, there is a risk that Google may change the ToS in an attempt to stop us from providing this functionality,” Balaban says. “This is the first face recognition toolkit for Glass, so we’re just not sure how Google, or the privacy caucus, will react.”

The privacy caucus he’s referring to has to do with the Congressional inquiry from earlier this month where eight members of Congress reached out to Google CEO Larry Page with over half a dozen questions about Glass’ capabilities and the potential impacts to user privacy. The Bi-Partisan Privacy Caucus, a group led by Texas Republican Joe Barton, wanted to know if Glass would collect data from users without their consent, whether or not Google would consider privacy before approving third-party apps, and a host of other things.

One of those questions was whether or not Glass would have support for facial recognition. That’s something Steve Lee, Glass director of product management, has already answered. In a statement offered to The New York Times, he replied, “We’ve consistently said that we won’t add new face recognition features to our services unless we have strong privacy protections in place.”

That’s not a solid “no,” of course. It’s more of a “no, for now.” Glass is simply too new of a technology to begin limiting what it will or will not do, at least in such definitive terms.

The only cause that would impact its use, according to Google’s policies, is one that says Glass is “not intended for use in connection with applications and services that might be subject to industry-specific privacy regulations.”

Obviously, lawmakers could still enact such a policy, if they chose to do so.

“Assuming Google and Joe Barton’s Privacy Caucus don’t attempt to stop us, [the API] will be available to everybody within the week,” Balaban says.

Google, it should be noted, has long since had the technology to build apps capable of facial recognition itself, but has always tread very carefully to not incite a privacy backlash.

In 2011, there were reports that Google was developing a mobile app that would allow users to snap pictures of people’s faces to access their personal information. That app never arrived, but facial recognition has since made an appearance within Google’s photo-sharing service Google+ Photos (previously Picasa), where users can now opt in to have their face recognized. This makes finding “pictures and videos of you easy,” explains the company’s documentation on the technology.

Perhaps one day, users will be able to “opt in” to having Glass apps identify their faces, too?

Time – and Congress’s reaction – will tell.