We’ve confirmed with Twitter that it has rolled out a new part of its #Music service for the web, charts that we were accustomed to from the company We Are Hunted, that it acquired and now powers the service.

The charts are broken up into a few areas: the familiar genre breakdown, as well as some categories like “Superstars” and “Unearthed” that appear to be built based on current Twitter trends and trajectory of artist mentions. This is leveraging all of the data that Twitter is collecting from tweets that include links to tracks from popular and emerging artists.

As you click on each category, the tiles on the page swap out quickly, letting you surf around to find new artists and songs. The categorization was a necessity to be able to find hidden gems, as the original breakdown of Popular and Emerging changed so rapidly: 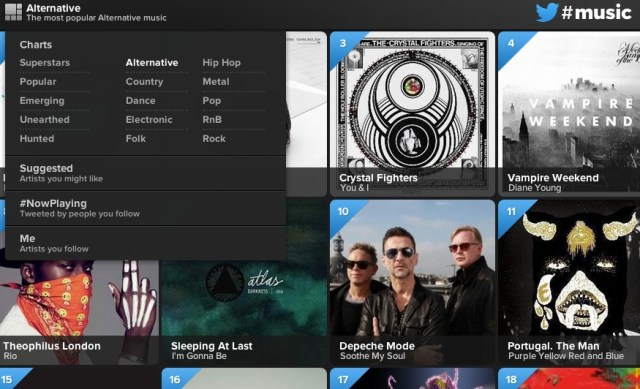 These are the types of charts that will get artists themselves more engaged on Twitter, as well as catch the attention of record labels who want to know what people are saying about the musicians that they’ve signed. Everyone in a band wants to know how well they stack up against others. In fact, some artists didn’t see the service coming at all, and were pleased with all of the new attention they were getting.

The service, which is still finding its footing, is still in the mode of getting musicians to participate by getting on Twitter and engaging with their fans. That engagement gives them a better shot of shooting up the charts and being found. With the addition of charts, which music listeners are also familiar with, people will be able to go deeper in finding songs that fit the genre that they like the most. Rather than waiting for Twitter to pair you with matches that it’s taking a guess on, the power is now in your hands.

If you’re an Rdio or Spotify user, then the entire #Music experience is seamless, but if you’re only buying music from iTunes, you’re not getting to hear full tracks within the app. It’s going to take a while for #Music to grip, as are a lot of Twitter’s “discovery tools.” As the company onboards more people who aren’t interested in tweeting, just browsing, they will benefit from sites like #Music being broken out. For those who are actively tweeting, it’s kind of neat to imagine that your support through tweets could shoot a band or artist up the “charts.”

These charts aren’t available for the Twitter #Music iOS app but are available to everyone on the web today.