Practice Fusion has made a name for itself over the past few years by tapping into enormous demand for digital health information — particularly health records. From its inception in 2005, the startup has been on a mission to disrupt the slow-moving, archaic world of Healthcare IT by providing a free, web-based electronic medical records (EMR) platform to doctors and their practices.

These days, we take free scalable, online platforms for granted, but at the time, Practice Fusion’s approach to EMR was far from being the norm in the healthcare market. Since then, the company has gone on to raise $64 million, attract some 150K medical professionals and grow to over 250+ employees. Today, Practice Fusion hosts digital health records for over 64 million people in the U.S., making it one of the largest web-based EMR platforms out there.

With the success of its EMR software, Practice Fusion is now looking to extend the functionality of its platform with the goal of building a true end-to-end health service. Setting its sights on becoming the Salesforce.com for doctors and the Facebook for health, last month the company launched Patient Fusion — a new complementary site that allows anyone and everyone to compare doctor reviews and book appointments within an hour of arriving at the doctor’s office.

The new service takes Practice Fusion into ZocDoc’s territory, combining Yelp-like reviews with an Uber-style on-demand booking service. However, unlike Yelp, which would allow users to rate doctors even if they’ve never stepped foot in their office, Patient Fusion aggregates ratings from patients after their visits. This allows the company to not only build a database of verified reviews (based on visits it knows actually took place), but to lay the groundwork for a sizable local physician search engine as well.

With several million reviews now live, today Practice Fusion is taking the next step toward being a full-service health information platform with the launch of a free tool that aims to help patients keep better tabs on their health spending. Now, along with the ability to book appointments and access digital health records, Patient Fusion allows users to track their health spending across their entire history of medical visits.

The platform, which officially launches in beta today, is available to Practice Fusion patients who are covered by national health insurance providers like Anthem Blue Cross and United. If the initial launch of Patient Fusion brought the company into Yelp (and ZocDoc) territory, then its new free service marks the beginning of Practice Fusion’s own version of Mint.com for health. 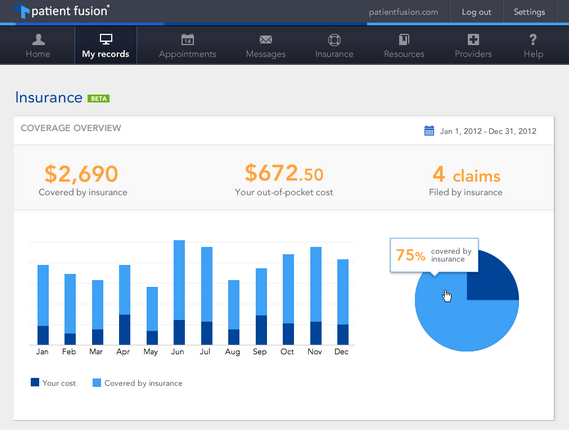 By aggregating patients’ health information and family health bills, Patient Fusion allows users to track and visualize the history of their health costs, including out-of-pocket expenses and deductibles, for example. The idea is to help users more accurately plan their flexible spending account (FSA) contributions and estimate the cost of future visits to the doctor’s office, for example.

Another key piece of the new service is that it includes insurance claims information to enable patients to view their claims history and determine which claims have been rejected, which have been accepted and which may need to be disputed. By allowing patients to more effectively stay on top of their health bills, the company also sees a potential upside for doctors — as easier expense management could lead to an increase in payments that are more accurate and are actually on time.

With the average person now spending $3,000/year on out-of-pocket medical costs and with medical bills now representing one of the leading causes of personal bankruptcy in the U.S., Practice Fusion is hoping that its new tools can alleviate some of this financial stress. While the company is far from being the only service to allow patients to track their health spending, the service has the benefit of being tied to one of the largest EMR platforms in the U.S. and a search and booking service that now includes more than 27,000 verified providers.

By simplifying health expense tracking and by allowing people to view out-of-pocket expenses incurred to date (as well as costs covered by insurance and the remaining balance of their deductible) — all for free — Patient Fusion comes with plenty of appeal.

This is especially true for doctors and practices already using the company’s EMR platform, as they can now direct their patients to its appointment booking and expense tracking tool without worrying about the high costs of ZocDoc or other similar services. And, for its new tool, having access to the huge network of medical professionals using its EMR software, this means ready-made scale.

The new service will be of particular interest to startups like Simplee, which launched its own “Mint.com for healthcare expenses” service and medical wallet back in 2011 to enable people to better track visits, monitor benefits and pay bills online. More recently, Simplee has expanded its reach by bringing a payment and loyalty platform to hospitals in an effort to give them a better way to distribute bills (digitally), and, last month, it launched a new mobile app that allows people to pay their family’s medical bills from their phone — on the go.

While Simplee has managed over $2 billion in medical bills to date, Patient Fusion’s new service puts the two companies in direct competition — at least in regard to this functionality. However, Practice Fusion’s version does not yet support bill payments, only expense management, nor does it yet have the mobile piece. Though Simplee’s platform is (arguably) more extensive at this point, it likely won’t be long before Practice Fusion fills the remaining gap.

What’s more, as the company further extends it health platform, potentially adding integrations with popular health-tracking devices (like, say, Fitbit), Practice Fusion will begin to compete with a whole new category of startups and companies. While it remains to be seen which tools the average patient will find more accessible (and usable), at this point, given the ridiculous cost of healthcare and medical expenses, the average American will welcome any help in this regard with open arms. 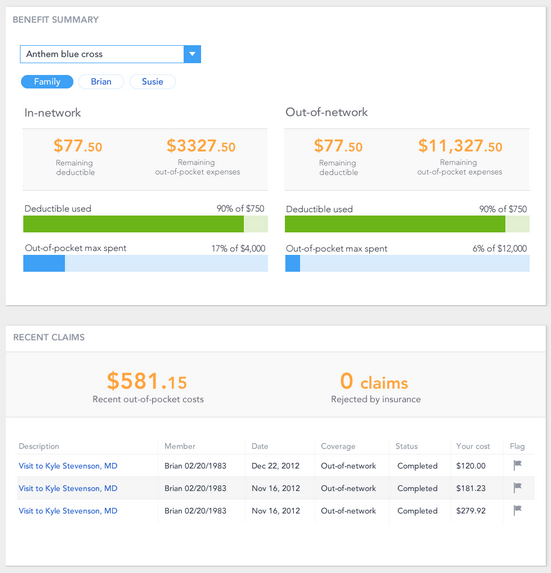