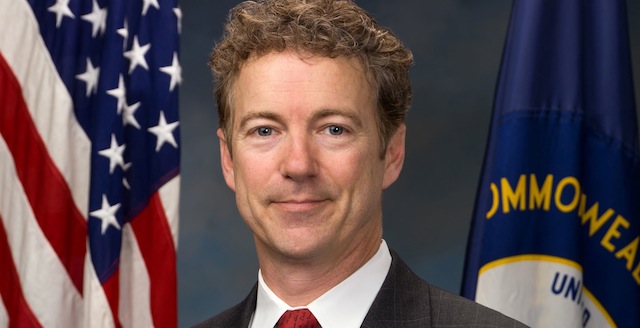 “It’s absurd for Congress to vilify businesses like Apple for wanting to minimize their tax code just like every other American rightly does,” tweeted uber-Libertarian Senator Rand Paul, lashing out at his Senate colleagues for ‘dragging’ Apple CEO Tim Cook in to defend his company’s tax policies.

On the eve of Cook’s much-hyped testimony, a Senate investigation released a scathing report, accusing Apple of cooking the books and engaging in shady tax-dodging practices, to avoid repatriating $102 billion in offshore cash to avoid a 35 percent U.S. tax rate.

“Instead of doing the right thing we drag businessmen and women in here to berate them for trying to maximize their profits for shareholders,” Rand continued in another tweet.

“The ability to pay taxes of less than 2 percent on all of Apple’s offshore income gives the company a powerful financial incentive to engage in convoluted tax planning to avoid paying U.S. taxes,” notes the report from Senators Carl Levin and John McCain of the Permanent Subcommittee on Investigations (for a more detailed explanation for how Apple dodges billions in taxes, see our previous post)

Paul was rightly furious for the tone of the accusations, which blamed Apple for skirting its obligation to the U.S. government. “This is a vendetta against American companies for trying to maximize profit,” he said. “I want to see one company come before here and tell us that they’re goal is different from Apple’s, that their goal is to maximize their tax burden.”

Noting that thousands (if not millions) of U.S. citizens hold Apple stock directly or through pensions, Paul argued, “When we want to punish Mr. Apple. who are we punishing, we’re punishing ourselves.” Indeed, Apple would be hosing the everyday shareholders if it didn’t maximize its profit through some very convoluted offshore tax strategies.

However, Paul’s transparent theatrics fell short on his solutions, which included a passing mention to a “repatriation holiday.” Back in 2004, the U.S. government gave a juicy tax repatriation holiday to incentivize bringing foreign holdings back to the homeland. Yet, according to the nonpartisan Congressional Research Service, that money didn’t go into research and development. Indeed, many of the companies cut jobs, instead funneling their new domestic coffers into providing dividends to its shareholders.

Now, Paul and others could argue that lower taxes, overall, would stimulate investment in innovation, but he shouldn’t be so glib to the very real implications to a tax repatriation holiday.

The actual testimony has been far more diplomatic than the report, which lavished Apple with kudos. “I. Love. Apple…I harassed my husband until he converted to a MacBook,” gushed Senator Claire McCaskill.

Former presidential candidate and Senator John McCain, for his part, joked, “What I really wanted to ask was why the hell I have to keep updating the apps on my phone.”

Cook, himself, briefly lobbied for two solutions: a simpler, reduced U.S. tax code and a “single digit” repatriation tax. While such a tax solution is up for debate, the most compelling statement was made by Senator Rob Portman to Tim Cook, “you don’t need more tax lawyers, you need more innovators.”