The two companies’ partnership produced the hit Mini Golf Matchup. Launched at the beginning of March, the game reached 10 million downloads in its first month and took the number one spot on the App Store in 28 countries eight hours after its launch.

Antony Blackett, the managing director of Rocket Jump, says that working with Scopely helped his team mitigate the disadvantage of being so far away from other game developers.

“When your head is down and you are building a product, you don’t really have the time to build the relationship you need to talk with Apple and constantly show them what you are building. When you are in New Zealand, you don’t get that opportunity,” he says.

Rocket Jump is exactly the kind of company Scopely looks for, says co-founder and CEO Driver. Scopely was “born out of the recognition that there is a lot of amazing content created out there that can make lots of amazing user experiences, but conditions in mobile gaming make it hard for independent developers to compete at a higher level in terms of distribution, monetization and service side infrastructure,” Driver says.

Since Driver and Elbaz launched Scopely in 2011, the company has raised $8.5 million in seed funding in a round led by Anthem Venture Partners.

Driver first noticed Rocket Jump after seeing Major Mayhem, which was published by Adult Swim and marketed with ads on its TV network. The rail shooter game was a top ten overall app in nine countries in the App Store and in the top 25 all-time user ranked games in Google Play. The two companies began working together in February. 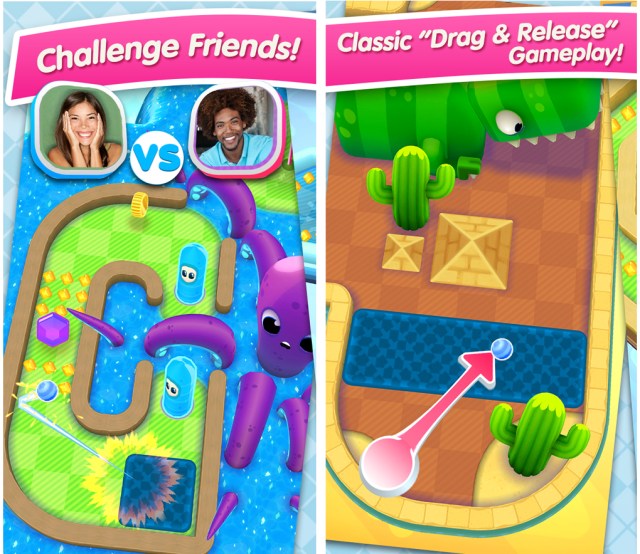 Scopely helped develop the Mini Golf Matchup’s multiplayer experience and monetization model. The company also marketed the game by leveraging its user base, which Driver says is in the tens of millions.

“Discoverability is a huge challenge. You can make one of the best games that people have ever seen and if you haven’t exposed it to enough people at launch, then it won’t have a life. Our advantage is having a large user base to market to and launching stuff on a consistent basis,” says Driver. “Independent game studios might launch a couple titles a year, but we know the partners that are most effective at paid user acquisition.”

Scopely’s pre-launch marketing efforts helped Mini Golf Matchup achieve over one million downloads on its first day. After that, Scopely focused on the game’s multiplayer mechanics, with incentives for players to invite more friends. They also created a monetization model with advertising partners like Starbucks and Coca Cola for free versions of Mini Golf Matchup.

The company faces competition from game publishing giants like GREE, Zynga, DeNA and Chillingo, but Driver says his Scopely’s smaller size is one of its strongest assets. In addition to Rocket Jump, Scopely’s partners currently include four other game studios: Double Fine, Big Cave, Highline and Zupcat.

“We feel like we can’t provide the kind of value we want to provide for 100 partners and we don’t want to,” says Driver. “There are quite a few publishers out there that make a volume play of as many things as they can and hope something becomes a huge phenomenon. We don’t feel that provides the best service for our partners and it’s not the most likely way to make Scopely successful.”

Though Scopely also creates its own games, Driver says that those projects are meant to help it improve its tech platform and develop new mechanics, such as a tournament feature, that it can in turn apply to its partners’ games.

“Scopely has been very hands-on. On the development of the parts, it feels like they are a lot more committed to it than other publishers are,” says Blackett. “It felt more like a co-development than a publisher-developer deal.”