In the debate surrounding native versus web apps, the mobile web has been getting a bad rap lately. Not least since Zuckerberg famously threw HTML5 under a bus. But for publishers, a mobile website is more often essential, even if they have a shiny so-called “native” app too.

Brow.si, a new product from MySiteApp, is launching in open beta today as an add-on for mobile websites that promises to bring a number of features to rival the engagement of native apps. These include social sharing, a read it later button, subscriptions, and push notifications (sort of). Developers can also create additional extensions for the Brow.si platform to add further desktop web/app-like functionality and monetization options.

Once the Brow.si code has been integrated into a mobile website, the site gets the Brow.si toolbar added to it. Clicking on the toolbar reveals a row of buttons incorporating the new features, which include sharing the page to multiple social networks, a read it later option that ties into Pocket and Readability, and the ability to adjust font size. Further mini-apps are on their way, too. These will come from third-party developers that Brow.si hopes to attract, thus creating a marketplace as part of the platform.

Having all of these features — and more — nicely implemented via a simple to install add-on takes care of much of the heavy lifting for publishers. As simple as it sounds, trying to crowbar in even something as mandatory as social sharing buttons onto a mobile website can be a kludge. 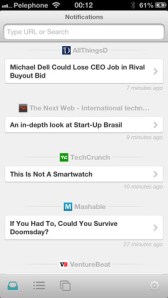 Lastly, Brow.si is talking up its support for push notifications, a first for the mobile web, it claims. A more accurate description, however, might be to call it a bridge between a mobile website with the Brow.si add-on and the Brow.si Reader app, a native iOS app that site visitors are prompted to install. It’s via this native app that the push notifications arrive, even if they originate from a Brow.si-powered mobile website. Cleverly, the Brow.si Reader app is also a fully-fledged browser, meaning that it effectively puts the Brow.si toolbar across any site if viewed within it, which the company will be hoping that users habitually do.

Meanwhile, Brow.si has been selected as a WordPress VIP feature partner, meaning that WordPress VIP customers will be able to install the Brow.si plugin with a single click to add its functionality to their mobile website. It’s also available for a range of other CMS software, including Drupal, Joomla and Blogger.