Mac app Minbox launches to the public today, attempting to differentiate itself from competitors through speed and ease of use. The app allows Mac users to send files directly from their desktops — either through attaching the files or through a very simple drag-and-drop feature through the Minbox icon in the top-right corner.

As you can probably tell from the demo video above, Minbox hopes to gain traction in the file-sharing space through being faster and more nimble than competitors. According to Minbox founder Alexander Mimran, the service is twice as fast as Dropbox for uploading and sharing files (you don’t have to wait for the file to upload to send). 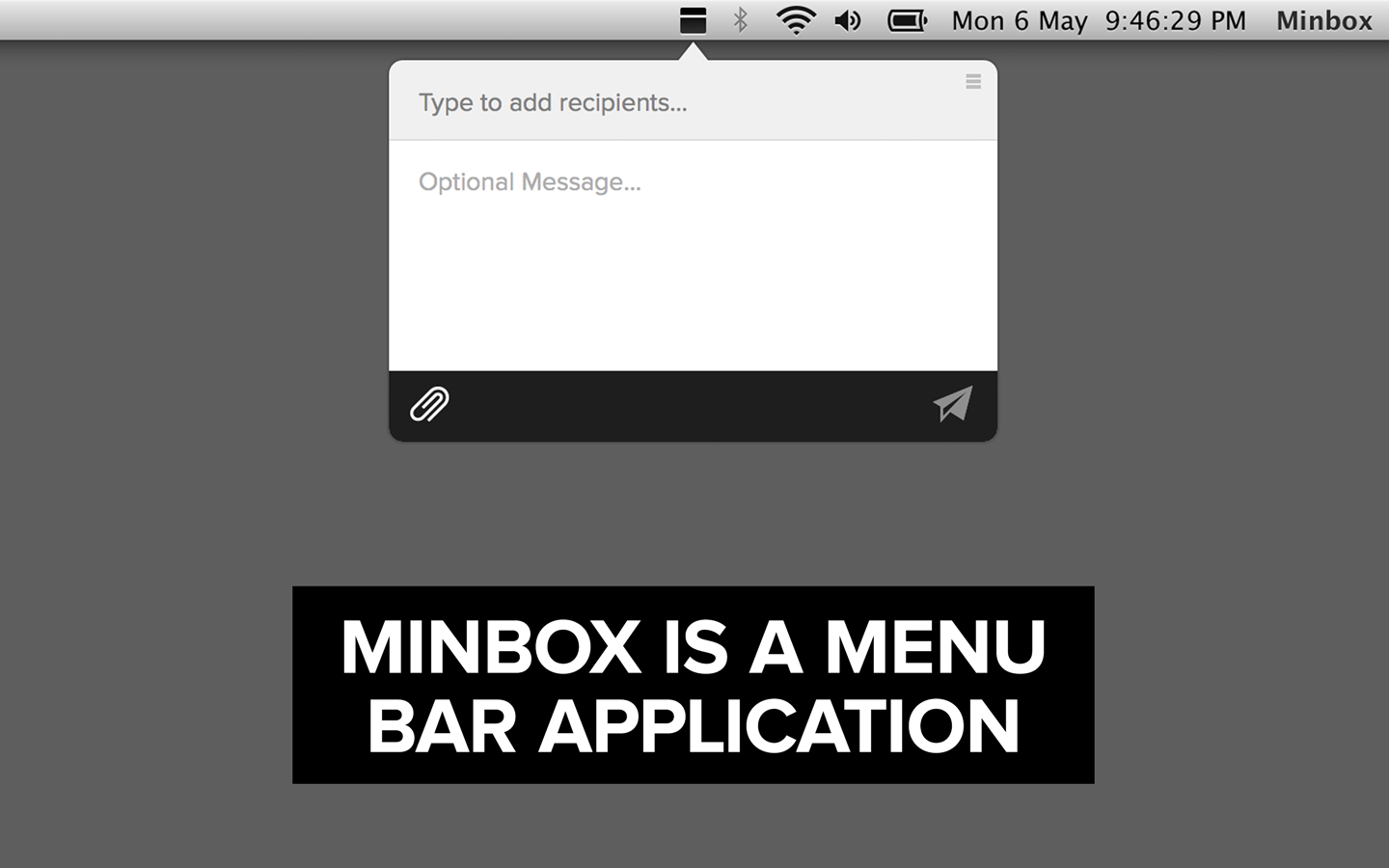 “Our main speed difference is that we upload direct to S3 from the client,” says Mimran. “We use multi-thread file uploading, we compress files, and a host of other things.”

Although Mimran has no data for YouSendIt, Minbox is by default faster from this user’s perspective — YouSendIt basically forces you to log in to the web version to send something, makes you copy/paste your recipient’s contact information and, if you want to send a file larger than 50MB, you’ll have to plunk down $9.99 per month.

While YouSendIt does have a Mac app that ostensibly makes file sharing from your desktop easier, I’ve yet to figure out how to send a file from the app. I think I might have to pay it so the option to share isn’t grayed out, like below. Again, not particularly fast.

“The cloud-storage space is focused on ‘backup’ and ‘sync’, but a large component is neglected… that’s ‘send’,” says Mimran, whose background is in product and design, where speed of sending files is acutely important. “We all send files on a daily basis and believe there are still too many pain points associated with the process — we’re focused on easing that pain.” Mimran maintains that Minbox’s “killer feature” is the ability to share a file by right-clicking on it, a functionality that Dropbox recently axed.

The product, which began its life as a Mailbox-esque smart iOS email client, is free no matter how large the files you’d like to send are: “GoPro users love Minbox!” Mimran says.  He  plans on eventually charging users for any file storage beyond 30 days, which highlights that the startup wants to focus on file sharing and not storing. Mimran concedes that Dropbox handles storage better anyways: “We’re about the ‘Send’!”

Eschewing the idea of shared folders, Minbox does okay on the “Receive” part of the equation as well, with email notifications when something is sent to you and a mobile and desktop view that allows you to visually scan through sent photos in a grid format, even when RAW files, even without a Minbox account. If Dropbox is your favorite photosharing app, you understand how useful this is. Eventually he’d like to build a Minbox feature that allows recipients to browse inside a zip file without having to open it, so you can manage these sorts of files on your phone. 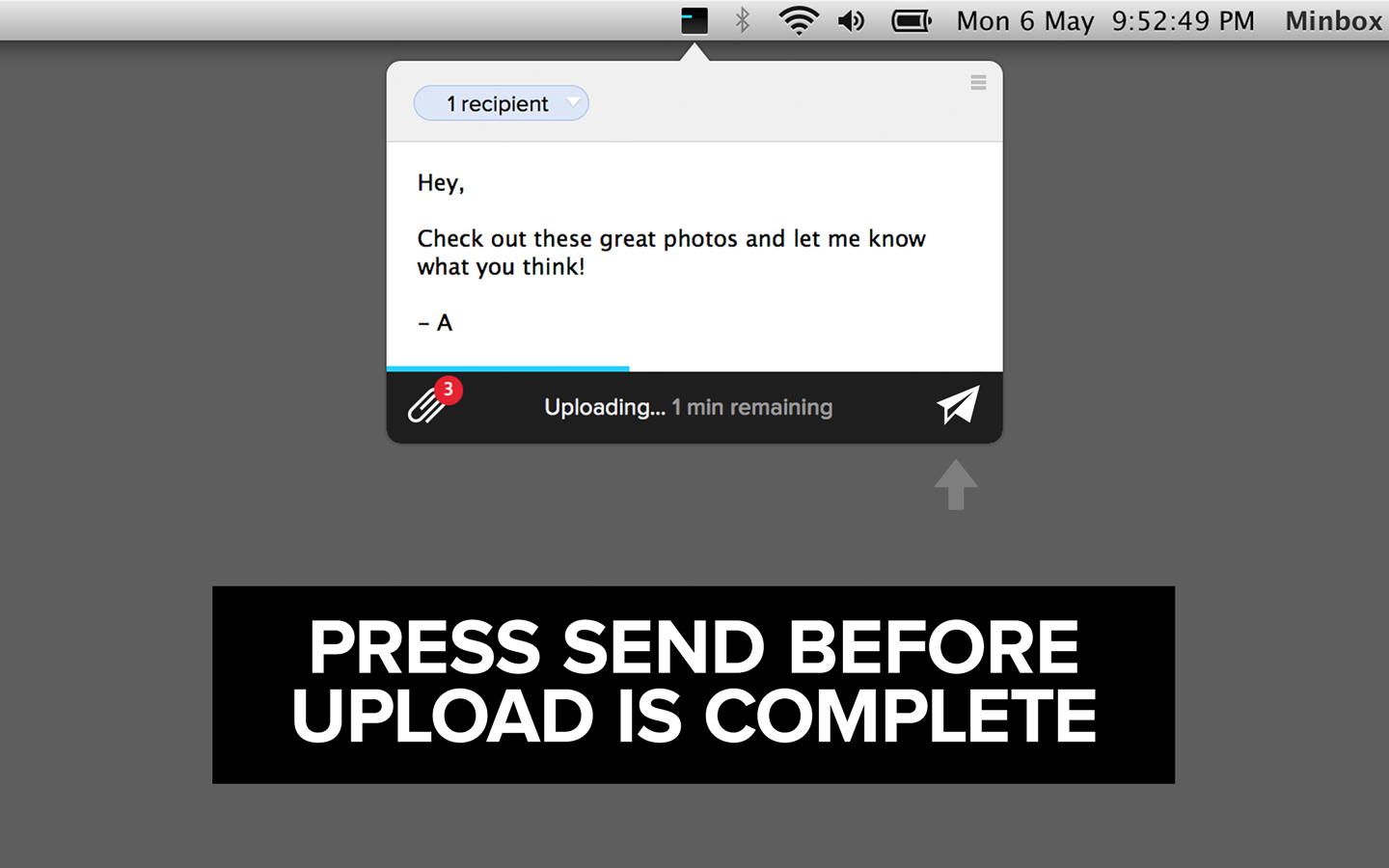 The company has already raised $900k to accomplish its goal of sharing files the fastest. Completing an angel round in early 2012 of $100k from George Babu (ex-Rypple) and friends, and then another round of $800k in May of 2012. Seed investors include George Zachary at CRV, David Cohen at Bullet Time Ventures, Correlation Ventures, Rho Ventures and angels Jeff Zucker, Matt Ocko, Tim Young (Socialcast, About.me), Ben Chestnut (Mailchimp) and others.

Mimran is also a hustler. Again, in case it’s not obvious from that demo video going straight for Dropbox’s jugular. He had a spreadsheet full of journalists he contacted for this launch, and cold-called Apple to get his app through the door, “Like up and down the [phone] directory.” He also showed up at random publications’ offices to pitch, though not ours. He was actually invited to ours. 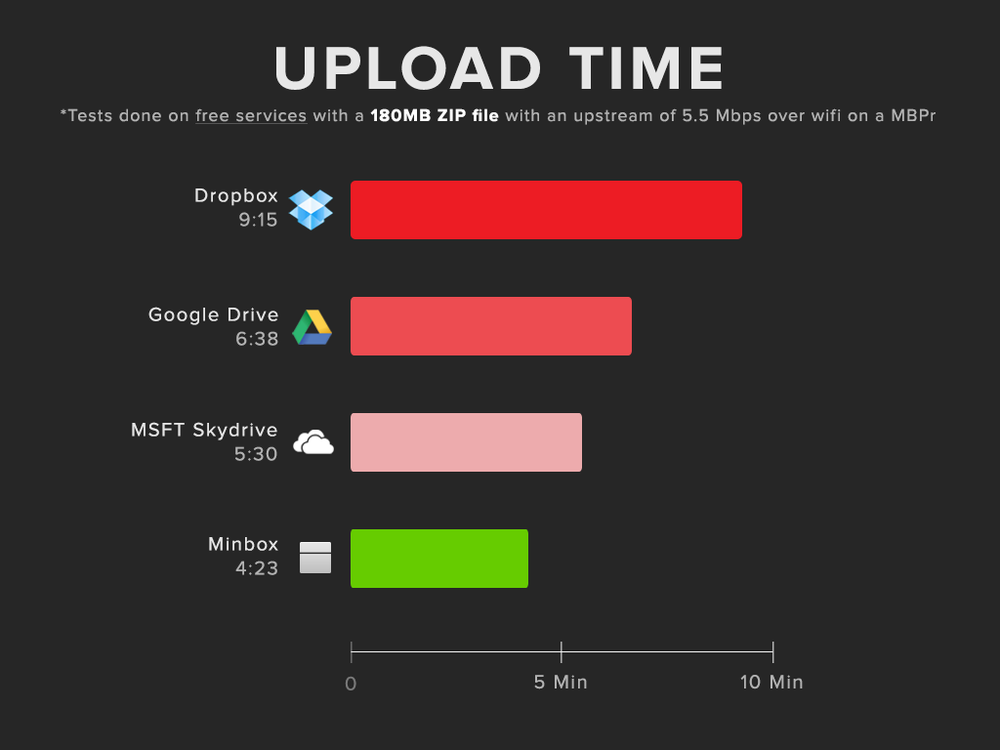 Users can sign up for Minbox here, and the service will give you an ETA for entrance based on your time of entry and how well their servers are doing. Really.