Automated Insights, a startup that translates raw data into plain English, is launching a new product that could make analytics data a lot more accessible.

The new product, called Site Ai, pulls data from existing systems (it started with Google Analytics and Clicky, and the company is currently taking votes on which service to integrate next), then it summarizes that data in normal sentences. For example, it can create a daily or weekly report that will tell you how current traffic compares to past patterns, what referring sites are driving the most searches, what keywords are driving the most searches, and so on. (You can see a sample report near the end of this post.)

Is it really all that difficult to get that information from Google Analytics? I don’t think so, but there’s still value in going that final step and distilling the data into bullet points that everyone can understand. (At TechCrunch, for example, all the writers have access to our analytics, but we still send out a weekly email summarizing the major trends, and I had to create a similar team email when I wrote for VentureBeat.) Automated Insights founder and CEO Robbie Allen wrote a blog post in January criticizing the dashboard-based approach to analyzing data:

The problem with dashboards is that they don’t directly provide insights or deliver knowledge about the data. Even worse, most visualizations require the user go through the mental exercise of interpreting the results. Unless the user knows something about the way a visualization is constructed, (e.g., X-axis, Y-axis, units, scale, etc.), the results can be difficult to understand. For a segment of your audience (arguably a small segment), requiring this level of analysis and interpretation is probably ok. However, this also means many users will be excluded from being able to get anything meaningful from the data (I refer to this group as data novices.)

Put another way: With a Site Ai summary, you shouldn’t have to do too much thinking.

As the company name implies, all of the summaries are automatically generated by Automated Insights’ technology, not people. Allen told me that’s a big challenge: “Turning data into text is difficult because it requires marrying two skills that traditionally don’t play well with each other: programming and writing.” The reason Allen said he can do it is because he has a background in both technology (he worked at Cisco and has degrees from MIT in computer science), but also in writing (he’s the author of a number of books published by O’Reilly). 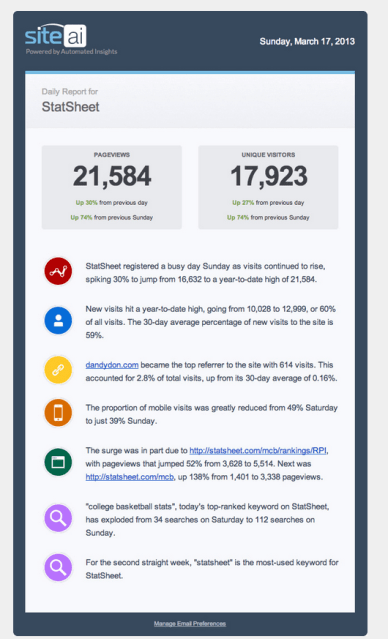 The company is doing something unusual with the pricing too. It’s offering free sign-up for 60 days, but after that, the price will depend on how many people sign up. If there are more than 10,000 registered users at the end of the trial period, the price will only be $4 per user. So people who like the product have more incentive to tell their friends — Allen called it “viral pricing.”

Beyond its new product, Automated Insights says it will produce 300 million personalized stories in this year for customers like Yahoo, Microsoft, and the Cleveland Indians. The company, formerly known as StatSheet, has raised $5.3 million in funding.