Google I/O, the company’s sixth annual developer conference, got officially underway in San Francisco on Wednesday, and it was an eventful day. It took the company every minute of its epic three-hour keynote to unfurl a laundry list of announcements and updates, seemingly across every product category in its arsenal — from Android, Chrome and Search to Maps, Google+ and Hangouts — each with a fresh coat of paint. We even saw the arrival of Google’s very own subscription music service, today, which is already being touted as a potential Spotify killer.

Amidst Larry Page’s triumphant return to the stage (after addressing his much-discussed vocal issues yesterday), Google’s soaring stock price and sexy smartphone demos, it was easy to miss an important announcement concerning Google’s foray into a considerably less sexy market: Education. (And K-12 education, no less.)

Android Engineering Director Chris Yerga took the stage to introduce Google Play for Education, through which Google hopes to extend Play — its application and content marketplace for Android — into the classroom. The new store, which is scheduled to launch this fall, aims to simplify the content discovery process for schools, giving teachers and students access to the same tools that are now native to the Google Play experience.

Teachers will now be able to search for and recommend learning content by category, grade level, and a variety of other criteria, and will have the opportunity to discover content recommended by other educators, for example. What’s more, every piece of content served within its curated portal is pre-approved by educators before being posted, so that teachers can rest easy knowing the recommended content is quality and school-appropriate.

Google has already begun to recruit content partners, with NASA and PBS among those that have already signed on to make their content available to users when the store goes live this fall. Yerga said that the team plans to begin accepting content submissions from developers at some point this summer. 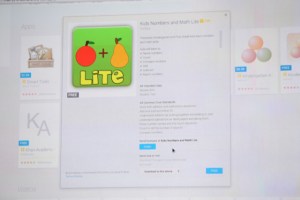 Today, Apple is far and away the de facto leader in the education space, but with its new educational app marketplace, Google is clearly positioning itself such that it can begin to make a real play at challenging that dominance. To that point, the real key to Google’s new product is the fact that it enables administrators to distribute applications to their entire team. If a teacher wants to shoot content to a couple hundred Android devices, they simply have to type in their group’s name and voila, Google will push that sucker out to everyone on the list.

Another important perk for cash-strapped teachers is that the marketplace doesn’t require them to use credit cards to purchase content. Instead, educators have the option to buy apps and content in bulk and charge those purchases to their account. These are important features for educational users, removing a great deal of the friction around acquiring learning content.

Not only that, but, while schools and educators are eager to bring apps and other digital learning tools into their classrooms, it’s critical for them to be able to manage and to bring some oversight to the content distribution process. Plus, the Android Marketplace, er, Google Play, has had a long-standing malware problem, so that extra layer of teacher control can help get schools over the hump.

While the penetration of Apple’s mobile devices into education is significant, when it comes to other hardware, IT departments don’t want to deal with the hassle of networking iDevices. Plus, Apple products are expensive — and especially for bulk orders, schools will want to turn elsewhere.

Where Google can have a real advantage over Apple is in its ability to combine Google Play for Education with Google Appls for Ed. Small businesses have been adopting Google’s productivity software in droves, and the interest has started to grow among school boards who want to introduce tablets into their classrooms and use Google Apps as the standard.

Together these two products can work hand in hand in the classroom, with each becoming more powerful as a result. In turn this could help create the incentive or leverage that it needs to begin attracting new users. 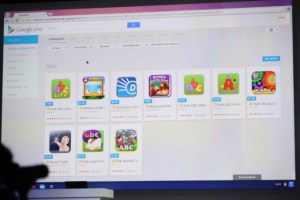 The biggest takeaway: If it weren’t already abundantly clear, Google is no longer just a search company. The company has been exerting tremendous effort to achieve a unification among its products, not only in terms of design, but in the way its products interact with each other. That is best demonstrated by the fact that Google products now touch just about everyone. In a sense, Google is becoming a utility provider — for both consumers and developers — and, in turn, a data company.

While Apple has long been focused most of its attention on design over the years, Google’s focus on utility has allowed it to build a massive infrastructure, collecting data from across a broad range of software products at a nearly unprecedented scale. For me, there’s no better testament to the utility and wide application of Google’s infrastructure than Education.

Naturally, in juxtaposition with sexy new smartphones and mobile technology, streaming music services and re-imagined social networks, Google’s work in Education tends to end up in the backseat. But, for this reason, Google has quietly (and quickly) gained noticeable traction in Education, thanks to the adaptation of its utilities and gadgets, like Google Apps and Chromebooks, to the learning market.

For example, in February, Google announced in February that Chromebooks are now in over 2,000 schools across the U.S. For awhile now, Apple has grabbed most of the attention in the education space thanks to the rapid adoption of iPads among schools and teachers. Furthermore, when we talk about Google having positioned itself as a provider of essential utilities, there’s probably no better than the company’s recent announcement that the entire country of Malaysia — that’s 10 million students, teachers and parents — will use Google Apps for Education as part of the country’s effort to improve its education system. 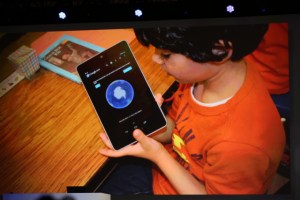 Through its Google Apps products, Google allows students and teachers to collaborate in realtime through Web apps, while using already-familiar tools like Google search and Gmail. The other part of this is, Google’s cloud, its infrastructure, allows it to operate its software products at scale without the traditionally high costs. For that reason, the company can make its educational products accessible to cash-strapped IT departments, for example.

With infrastructure that allows it to run its software at scale from the cloud, Google’s products become more flexible. That foundation behind it, with Google Apps having found penetration among small businesses, it adapted the suite to address similar productivity and collaboration inefficiencies in education.

Apply that to Google Play and pair it with Google Apps, and you can start to see why EdTech entrepreneurs and investors, when asked what the biggest trends are in education (that no one’s talking about yet), more than a few have said “start paying attention to Google.”

And with the impending arrival of Google Play for Education, if Google can start to get Android tablets into the hands of kids, it looks like they might just be onto something…