Lucky Sort, a Portland, Oregon-based startup behind a visualization and navigation engine called TopicWatch that helped to discover patterns in live data streams, has been acquired by Twitter. Terms of the deal were not immediately available, but the company has announced via its website that it will be shuttering its service in the coming months, and several members of the team will now be relocating to Twitter’s San Francisco offices to join the company’s “revenue engineering department.”

The startup had operated somewhat stealthily until early 2012, when word came out that it has raised a half-million seed round from Neu Venture Capital, Invite Investments (founders of Invite Media) and several angel investors, including Adam Riggs (Shutterstock.com), BankSimple co-founder Alex Payne, plus chaos theory physicist, quantitative trading pioneer, and roulette wheel hacker Norman Packard, Ph.D., who became the Chief Science Officer at the firm.

Packard is not joining Twitter, but CEO Noah Pepper, Jesse Smith, and Daniel Fennelly, are moving to San Francisco.

With the company’s first product, TopicWatch, users could sift through social media, government filings, news and commentary in real time to find, summarize and analyze any text-based content. It was more than a “social listening” or “sentiment analysis” firm – those were only subsets of its overall capabilities.

Analysis of Twitter data was also only part of what this platform could accomplish, as well.

In effect, Lucky Sort was a big data play – it used NLP (natural language processing) techniques to discover information from huge, unstructured data sets. What made it unique was its ability to derive structure without having to first define a database of nouns, verbs, etc. as traditionally would be the case with NLP. Instead, Lucky Sort was moved towards data mining through statistics rather than input ontologies.

Last November, the engine was put to practical use through a partnership with the social network for traders, StockTwits. The relationship offered the entire historical database of StockTwits (everything that had been tweeted or shared within the community), as well as a real-time feed coming into its service. These data sets were made available in Lucky Sort’s analysis interface, allowing investors to come in and examine how chatter in the StockTwits community has correlated with price action.

This could produce visualizations (like the one below), which could be operated via touch – including on the iPad. 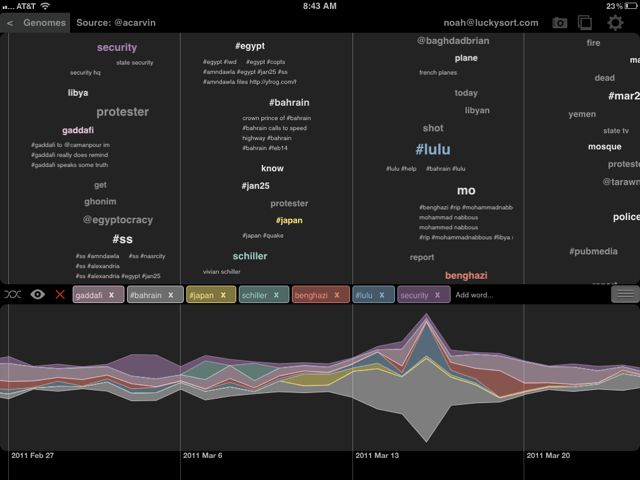 Today, Lucky Sort says that three of its team members are headed to Twitter, and a plan to transition customers off of its platform is underway. Asked what he meant by Twitter’s “revenue engineering department,” Pepper would only say, “it’s where we’ll be shoveling coal into the money printing machine.”

However he did say that as far as he knew, Twitter is not interested in getting into the finance vertical itself. “They wanted our technology and expertise for other things,” he says.

Lucky Sort had raised a total of $600,000 before the acquisition, with $100,000 coming from Howard Lindzon, StockTwits CEO and co-founder.

The startup joins other recent Twitter acquisitions, including another previously data-focused service called Ubalo, as well as others like We Are Hunted (which led to Twitter Music), Vine, Crashlytics, Bluefin Labs, and more.

The company’s official announcement is below:

Two years ago I started Lucky Sort with several friends. Our goal was to make huge document sets easier to analyze, summarize and visualize by building elegant and user friendly tools for text analysis.

Today I’m very excited to announce that our journey has entered a new phase: Lucky Sort has been acquired by Twitter!

Several of us will be moving to San Francisco to join Twitter’s revenue engineering department, so if you’re in the neighborhood and want to talk about text mining or data visualization give us a shout.

We’ll be helping current customers transition off our system in the coming months such that we can focus fully on our future at Twitter.

In building Lucky Sort we had an enormous amount of support from friends, employees, advisors and investors. It has been uplifting to have so many people help us and it highlighted just how much business is a social endeavour.

This story is developing….