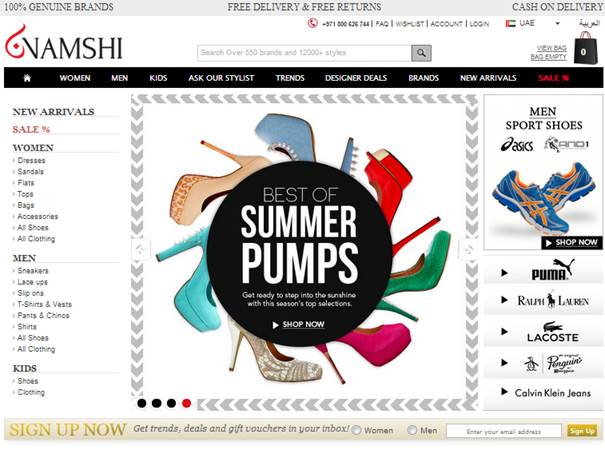 Rocket Internet, the German-based e-commerce startup incubator from the Samwer brothers, is today announcing another round of funding for its strategy to build out its footprint into emerging markets. Today it’s the turn of Middle-East-based fashion commerce site Namshi, which is getting $13 million from Summit Partners. This is the second time Summit, a Rocket regular, has invested in Namshi, after a $1 million injection in January. To date, Dubai-based Namshi appears to have raised some $34 million, if you also count the reported $20 million from JP Morgan and Blakeney Management in September 2012. A Rocket Internet spokesperson would not confirm any of the sums apart from the most recent one, except to note that previous funding totals a “high double-digit amount.”

Namshi has been around since 2012 and currently sells products in six places — United Arab Emirates, Saudi Arabia, Qatar, Kuwait, Oman and Bahrain. As with Amazon-owned Zappos, Namshi sells shoes and other fashion — some 550 brands in all, including well-known labels like Nike, Lacoste, Polo Ralph Lauren and Puma.

“We see our partners’ growing support as an encouragement for us to continue serving our customers with world-class products and services,” said Hosam Arab, co-founder and Managing Director of Namshi, in a statement. “Our customers made the company what it is today. Therefore, they will be the ones to see the main benefits coming from this investment. We will further focus on providing a shopping experience like no other in the region.”

Part of Rocket’s pressure to expand comes from other competition on the ground from companies like Souq, another Dubai-based e-commerce operation. Like Namshi, Souq is riding a wave of fast internet growth in emerging markets at a time when more mature/developed regions like the U.S. are slowing down due to saturation.

It also comes at a time when Amazon itself appears to be getting more international in its ambitions for both its own brand and those that it owns, also tapping into these emerging market trends. One recent example: Amazon apparently staffing up for a bigger push into Russia with its Kindle services, which comes alongside resources also being put into a Russian expansion for fashion portal Shopbop.

International expansion makes sense for Amazon, which sells products at narrow margins and makes up for that with economies of scale. Given Rocket’s exit track record — selling portfolio companies to the likes of Groupon and eBay to aid in those giants’ international growth plans — it looks like one idea is for these startups to position themselves as acquisition targets for their U.S. counterparts. But, at the same time, Rocket is also building out businesses that follow that model and grow in their own right. Rocket Internet often rolls out multiple startups in the same region, and the idea is for these to use the same back-end systems, fulfillment operations, customer support and sales, and more to achieve their own economies of scale.

Developing markets have been a big target for Rocket Internet, with operations in Africa, Asia and Latin America in fact outnumbering those in Europe. And Summit has been no stranger to helping fund a number of these, including a recent $26 million for Lazada in Asia; $26.5 million in Linio (the “Amazon of South America”, which is funny since the Amazon runs through South America already); and $26 million in Jumia, another Amazon clone, this time in Africa.

“Namshi and its management team have done an exceptional job of growing the company, and we are happy to support the company’s continued expansion,” said Scott Collins, an MD and head of the Summit Partners London office, in a statement.