Disqus is launching a new feature today that the company says will help publishers get more value from everyone commenting on their site.

The company already offers something called Disqus Single Sign-On, where users who are registered on a given site can sign into the Disqus commenting system automatically. A company blog post describes AudienceSync as the “flip side” of that feature, where users can choose to share their Disqus information with a publisher.

“It’s an extension of how already Disqus works,” said CEO and co-founder Daniel Ha (no relation to me).

He added that the shared information can include a user’s name, context, and basic biographical information. The company says users have created more than 100 million profiles. 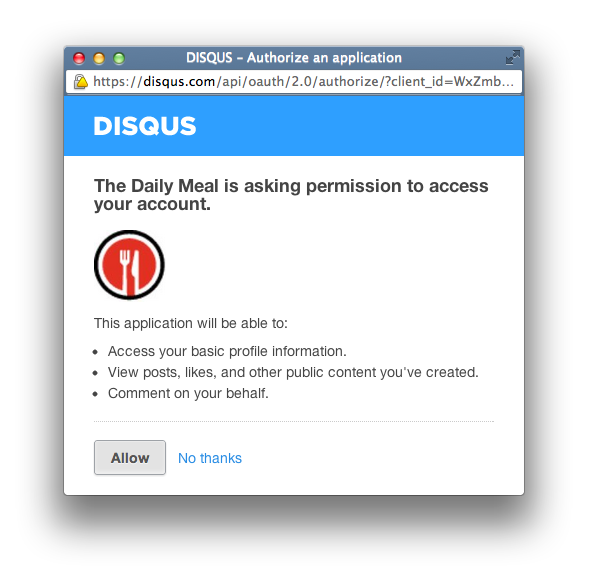 Since publishers who use Disqus for their comments might still manage their own user registration systems, for example to send out email newsletters, AudienceSync should allow for a fairly seamless transition between the two systems.

“This is another way we’re helping publishers get more direct financial value of their investment in comments,” said Vice President of Marketing and Communications Steve Roy. He also said this removes “that false choice” that publishers face between trying to access a bigger audience through Disqus versus running their own registration, where they have direct access to user data: “This is essentially the best of both worlds.”

The company has been testing AudienceSync with a few of its publishers, and you can already see it live at The Daily Meal and Michelle Malkin. The feature is now generally available to Disqus publishers.

Disqus is also announcing that it has now been installed on 2.5 million sites and reaches more than 1 billion total monthly visitors. Ha acknowledged that this is really a measure of the reach of the company’s publisher network, rather than its engagement — those visitors may just load an article with Disqus comments without actually reading the comments or posting one of their own. But he also said that more than 55 percent of those visitors will actually view the comments.