Though Foursquare is now busy trying to take on Yelp, one of its more rewarding, but personal, use cases (now that the fervor around badges and mayorships has died down), is its ability to add insight and data around your check-ins. Often after registering your location, the app rewards you with a little encouragement or commentary via a pop-up message. Today, the service is making these little moments shareable with a new button that lets you edit and post that message to Facebook, Twitter and more.

For example, you might learn that you hadn’t been at some airport since last December, or it’s your third day in a row at a favorite location. In Foursquare’s blog post about the feature, it gives the example of a user who wants to brag about hitting the gym three days in a row. (Though let’s get real, we’ll probably see more people posting about their ongoing bar streaks, don’t you think?) 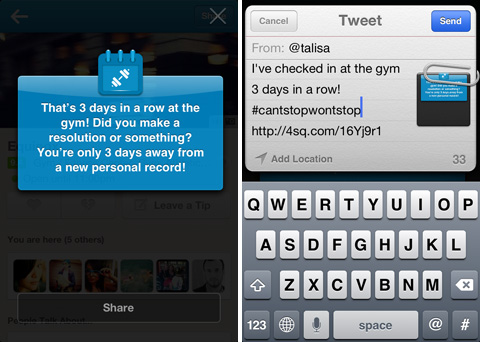 The update may seem to be a minor one on the surface, but it’s one that could encourage more of Foursquare’s users to return to the app more regularly in order to post and share rather than try to win a mayorship crown or some other tired prize, like a badge. These things were fun at first, but the excitement has worn off. But Foursquare still needs a steady stream of data to keep its local recommendations current and accurate.

The feature also ties in nicely with the new movement in “quantified self” devices – where users are trying on items like the FitBit or Jawbone UP, for example, in order to track and learn more about their daily activities through data.

Foursquare founder Dennis Crowley, in fact, expressed an interest in the quantified self space, during an interview he did with TechCrunch last week at Disrupt NY. Though he had dismissed the rumors about Foursquare developing wearables of its own, he did say that this is an area Foursquare would like to further explore.

Also of note, Crowley used an auto-checkin utility recently, when he ran the Boston Marathon (ahead of the attacks), which let him track his progress mile by mile – so he’s clearly a fan.

Foursquare is actually sitting on a goldmine of personal data through its historial check-ins, but prior to now, the messages taking advantage of that info have been ephemeral – you would see them and then hit close, nothing more. Today’s update is the first step towards letting users better interact with Foursquare’s data store, if only by posting it to social networks or saving images to their Camera Roll.

The new feature is available for iPhone and Android.