For developers who wish to introduce payment services through their websites or mobile apps, there are any number of payment processors available. Companies like Stripe offer APIs that help developers quickly integrate payments into their applications without having to build out non-core functionality themselves.

But what about developers who want to be able to take payments directly, like in real-life? On that front, the options are much more limited. While Square and PayPal and Intuit have done a good job of lining up small businesses to use its card reader and Register point-of-sale system, those customers are stuck using the platform provided to them. Those who wish to develop their own custom or branded solutions are out of luck when it comes to taking real-world payments.

Enter CardFlight, which is launching with an encrypted, Square-like card reader of its own, as well as an SDK and APIs that will allow developers to create apps and take “card-present” payments on their mobile apps. Those apps can then securely be used to swipe cards and have payments appear in their existing merchant accounts. 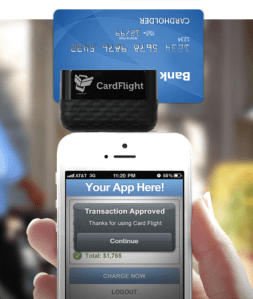 CardFlight CEO Derek Webster tells me that, despite the focus on e-commerce and mobile commerce applications, about 90 percent of credit card transactions still happen with a swipe. With that in mind, the company is hoping to make it easier for developers to build apps and for businesses to use apps with so-called card-present transactions. To do so, they need only add a few lines of code to those apps.

There’s also the CardFlight dongle, which is just like other credit-card dongles provided by Square, or PayPal, or Intuit. It’s encrypted, and safe and secure and PCI-compliant and all that.

The developer toolset is processor-agnostic, which lets developers pick from a whole bunch of existing merchant accounts. And, it’s integrated with Stripe to enable developers who use Stripe for their stored credit card payments to also accept payments from people who wanna swipe their cards.

All of that would allow a chain restaurant, for instance, to build its own applications and integrated POS systems. Or for event organizers to build (non-Eventbrite) apps for selling tickets at the door to their local venues. Or for CRM apps to enable card payments for in-person sales applications. Or other stuff like that. Really, the possibilities are kind of endless.

CardFlight is now entering into private beta, with a number of developers ready to start using its SDK in building their apps. Want to be one of them? Go here.