Sick of high-paid tech employees driving up rent prices, protestors in San Francisco’s Mission neighborhood held a “Anti-Gentrification Block Party” and beat on a Google bus piñata before cops broke up the crowd.  The area has long been home to artists and Mexican-American families, but they’re being forced out as techies move in, their employers set up shuttle stops, and housing prices skyrocket.

Mission district blog Uptown Almanac’s Kevin Montgomery was on the scene. He describes 30 to 40 people assembled at the neighborhood’s 16th street Bay Area Rapid Transit station. The spot is one of the dirtiest in the city — in stark contrast to fancy Valencia street just one block over where software engineers frequent posh restaurants and pricey bike shops. 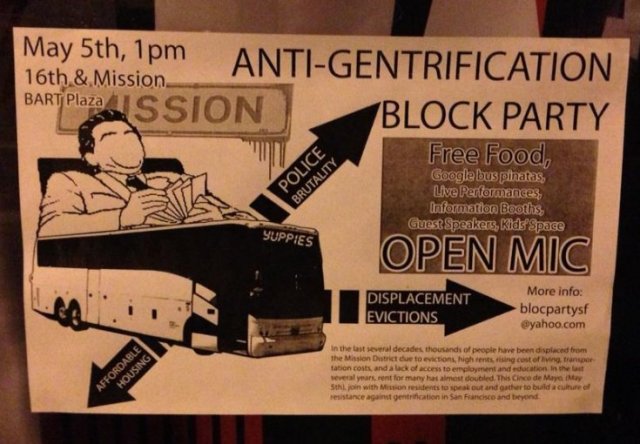 Google, Apple, and Facebook all have shuttle bus stops in the neighborhood making it easy for their employees to live in the hip district while commuting south to Silicon Valley in style. The buses have become a symbol of gentrification. Dozens of police officers surrounded the rally, fearing it might devolve into violence. Last May a riot broke out in neighborhood with many businesses vandalized with “Yuppies Out” graffiti.

Montgomery says that around 2:30pm yesterday “the [protestors] did string up the piñata to a makeshift fishing pole and beat it mercilessly” as seen in the video below from YouTube user Krionni. Soon after, the police swarmed in and dispersed the group.

As a three-year resident of the Mission, I’ve seen the influx of money from the rise of Apple and Google’s stock plus the Facebook IPO change its character. When the San Francisco Giants won the World Series, local techies came out to spectate and record the chaos with their iPads. Cheap grocery stores and eateries have been going out of business, while trendy bars and cafes move in. Rent increased 29% from 2011 to 2012 alone.

Unfortunately, I’ve haven’t seen the tech giants who’ve colonized the neighborhood do much to give back. Funding some local education or beautification initiatives could go a long way to reducing the gentrification backlash.