Sometimes the simplest product demos can be effective.

Take a new web editor called Barley. To show off the product, co-founder Colin Devroe opened me a regular old web page, then changed the wording of the page with just a few keystrokes. A small editing menu opened as he typed, but didn’t have to access an admin dashboard, open a separate editor, edit any HTML, or anything like that.

To be clear, there was more to the demo — but that was the heart of it. The point is to offer a web page editor with absolutely no learning curve.

When Devroe discussed the competitive landscape, he first mentioned WordPress, which can indeed be pretty complicated — and I say that as someone who’s writing and publishing this post through WordPress. There are simpler website building tools, such as Weebly, but Devroe pointed out that even in those cases, you still have to use a separate interface to lay out the page and edit the content.

With Barley, on the other hand, you just edit everything directly, just as if you were working with a document. And by using one of Barley’s templates, you don’t have to deal with layout at all. 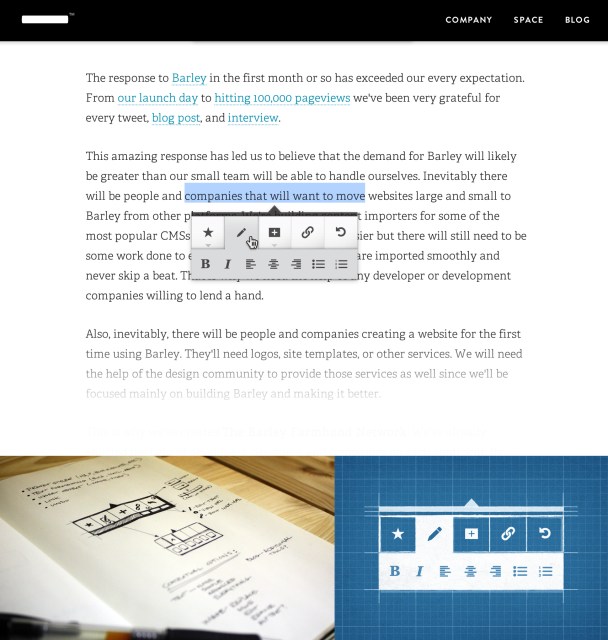 “You should never have to learn HTML or CSS to be able to edit a website,” Devroe said. “We hope to eliminate the reason why anybody that owns a restaurant wouldn’t have their own site.”

Devroe said that the team is definitely aiming for a small business audience, but since a small company — Barley is the first project from a startup called Plain — he isn’t trying to sell directly to those businesses.

Instead, he’s working with companies that might want to offer Barley as part of a larger package of small business services, and with developers and designers who can create custom websites for clients, then allow the business owner to edit the website on their own using Barley. In addition to offering easy editing, Devroe said the service is helps those designers and developers because they can distribute templates and update designs using Barley’s Dropbox syncing, and because it handles all the hosting.

Pricing is based on traffic and starts at $18 per month. Devroe and his team started letting in 500 users at a time earlier this week — you can sign up here.