Snackchat! Taco Bell tweeted, “We’re on Snapchat” last night, urging their Twitter followers to add them for a “secret announcement” sometime today. This is the first major brand to use Snapchat to reach customers, and could signal the beginning of Snapchat’s monetization.

Snapchat is an ephemeral photo messaging application that raised a $13.5 million Series A in February. Taco Bell reached out to Snapchat on Twitter yesterday; after a couple of responses from Snapchat (below), Taco Bell announced that they’re on Snapchat at the handle “tacobell.”

@tacobell okay! If you send an email to support@snapchat.com we’ll make sure it gets to the right place!

In December, when Snapchat co-founder Evan Spiegel told me the company was prototyping monetization features, I wrote about the most likely ways the company could monetize:

With a very captive audience, Snapchat could have very profitable ads. Imagine a picture snap once a day or every 10 snaps where you have to hold the image and view the ad for five seconds before using the app more. Or an advertising video snap that played on its own for 10 seconds, instead of you holding it down to view.

The problem with most mobile ads is that they take up too much of the screen at random times (Facebook app newsfeed, anyone?) and both mobile and web ads are ignored by users as they adjust to where the ads are located and just scroll past them.

Snapchat could offer advertisers a highly engaged user for a very brief period of time.

The most interesting part of this Taco Bell development is that the company asked followers to add them on Snapchat. There are two settings for “Who can send me snaps”: friends and everyone. Snapchat sends all users, regardless of their settings, video snaps on holidays like Christmas and New Years. If Taco Bell is asking users to add them, it means they’re — at least for now — only sending snaps to people who add them. But, at least from the tweets above, it looks like there’s been some sort of collaboration between Taco Bell and Snapchat so far. 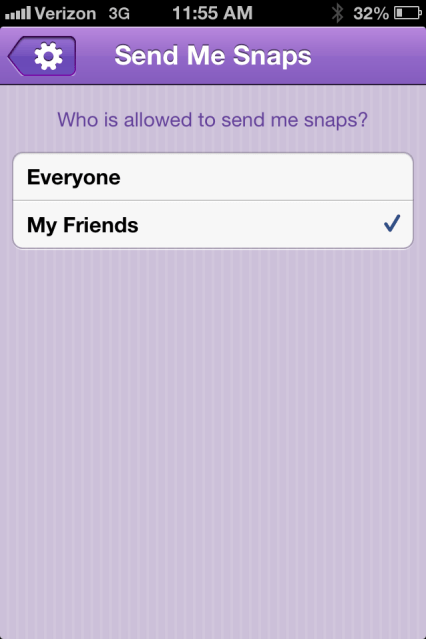 Taco Bell doesn’t need Snapchat’s help to snap people who have friended Taco Bell. So the logical next step would be sending snaps to everyone, the way Snapchat sends holiday snaps to all users — regardless of settings and who they’ve friended.

This could be very lucrative revenue source for Snapchat. Rather than banner ads covering part of the screen in snaps, users could ignore snap ads and simply not open them. But I think a lot of users, myself included, would open most of the snap ads out of curiosity. And obviously, an opened snap reaches highly engaged eyeballs, as it fills the whole screen, with the user physically touching the ad.

Of course, some users will be pissed off by ads invading their Snapchat inboxes, a far more private space than the public streams of social networks. For now, Taco Bell snapping to their “friends” is an interesting first step towards monetization.

I’ve Snapchatted Spiegel and Taco Bell asking for comment (seriously). I’ll update the post if I hear back and once Taco Bell sends out their surprise Snapchat announcement.

Update: reader Adam Britten points out that this is not the first brand to use Snapchat, as frozen yogurt chain 16 Handles used the app for a coupon campaign in January. Nonetheless, Taco Bell is a far more recognizable brand with a huge marketing budget, so their use of the app is likely more indicative of a larger trend both for brands and Snapchat users. 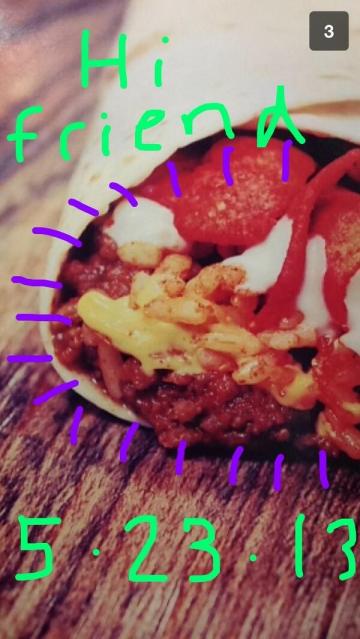 “People are obsessed with Beefy Crunch Burrito so Snapchat seemed like the right platform to make the announcement,” Taco Bell director of social and digital media Tressie Lieberman said to Mashable. “Sharing that story on Snapchat is a fun way to connect with the fans that we are thrilled to have. It’s all about treating them like personal friends and not consumers.”

I personally received the snap six times, and most people I’ve spoken with received it more than once, so the ability to send mass snaps is far from perfect so far.