How could a site for explaining rap lyrics make good on its $15 million in funding from Andreessen Horowitz? Because it’s also a collaborative text-annotation platform that enterprises are asking for. Today at TechCrunch Disrupt, the Rap Genius founders told me they plan to monetize by building installation of their site for big companies and government agencies. Biz Genius is coming.

After our free-wheeling interview on the Disrupt NY about the startup that offers crowdsourced annotations and explanations of song lyrics, religious texts, poetry, and now News Genius for current news, Rap Genius co-founder Ilan Zechory explained to me the genesis of its future business model. “When we raised money we got on the radar of some companies. Ben [Horowitz whose firm funded the startup’s entire Series A] has a background in enterprise sales and he has these connections in government and enterprise, and he asked if we’d be interested” says Zechory. The three co-founders talked it over and agreed to investigate the opportunity. 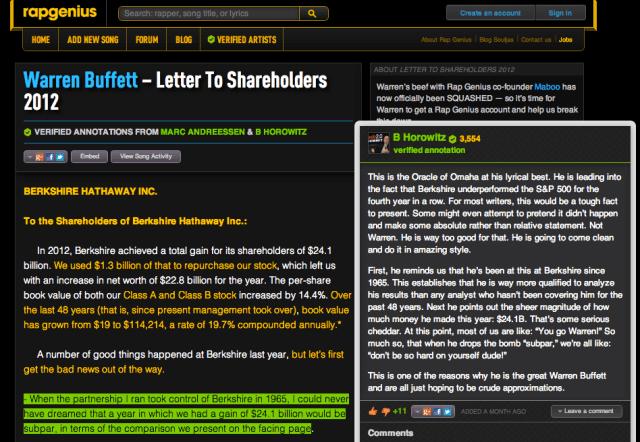 Zechory tells me enterprise collaboration around documents is still in a sorry state. “Right now they upload [a file] to some document storage system that’s garbage, and they email around it, but they need to comment on it directly. You have a bunch of people working on the same idea and the need to centralize all that information and conversation in one place where the source document is right there. We can provide a place where anyone can comment on a document, and beyond that there’s notifications built in sothe relevant players in the discussion will get alerted when other people add stuff. It’s the perfect tool for internal communication. It doesn’t replace email, but if you have something meaty you need people to read, think about, and give feedback on, we’re the perfect platform.”

Essentially the plan is to let businesses upload documents or images on their private Enterprise Genius installation. There they can choose specific lines of text or parts of an image to with annotations, such as references to background materials, potential corrections, or their sign-offs. Co-workers could then discuss comments in-line, vote up and down different annotations, and work towards a finished document. 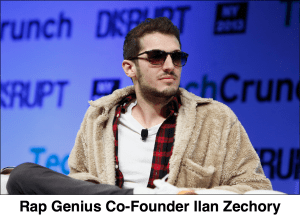 Rap Genius would face some stern competition in the space from Google Docs, Microsoft SharePoint, Asana, and other focused enterprise products. Still, it could serve a purpose for businesses that have to consistently do collaborative editing and approvals of documents. The team says big IT companies, natural resource giants, and even secretive government agencies have all expressed interest in private enterprise versions of Rap Genius. Co-founder Mahbod Moghadam jokes that a version for security analysts sharing interpretations of intel could be called “Spook Genius”.

The company certainly won’t be abandoning its focus on its free, public platform for adding references and explanations to any text. Zechory notes, “We’ll keep generating more leads but we have to think about how to prioritize [enterprise] with building cool things for consumers on the music and news site. Probably in a year or 18 months we’ll build a product for enterprises. By combining advertising and eventually premium accounts on its free sites with paid licenses to an enterprise version, Rap Genius might be able to generate serious revenue. Along with bringing more knowledge and transparency to the world, that money could fund further innovation, and attract an exit big enough to net Andreessen Horowitz a return on an investment some called crazy.

Read the eyebrow-raising quotes from our Disrupt talk with Rap Genius, and watch the wild video below