Nothing makes traveling to a new land more amazing than befriending a local or two. Meet the right person — someone outgoing, with knowledge of the locale — and it’s like punching in a cheat code. You’ll do better things, see better places, all while avoiding the generic tourist junk. But finding that person can be hard.

EatWith, a company presenting at Disrupt NY today, wants to make it easier. It’s like Airbnb for breaking bread with locals in their own homes.

Take the Airbnb concept of offering up your home as a sort of pseudo-hotel, but swap “hotel” with “restaurant”. Users pay the host for each guest (average prices seem to be about $35-$50 per guest per meal), and EatWith collects 15% off the top.

According to co-founder Guy Michlin, the desire to build EatWith came to him after a trip to Greece. His family was, by chance, invited into the home of a local family for dinner. A simple act, sure — but it was one that Guy still refers to as a “magical experience” for everyone involved. Guy and his family got to enjoy truly authentic Greek food (which he says “bore no resemblance” to that which they’d been served in restaurants) and culture, and it was the first time his host family had ever had anyone from Israel around their table.

“Most tourists won’t get a chance to meet the locals except maybe the Taxi driver, or the waiter in the restaurant,” says Guy. “but Eatwith aims to change this.” 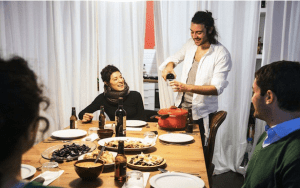 Guests get an experience far removed from the standard series of tourists traps, and the chance to make new, local friends in the process. Hosts, meanwhile, get to turn their kitchen into a micro-business and meet new people along the way. And if a host maybe undercooks the meal a bit and folks get sick? There’s a third party $1M insurance plan in place to keep hosts from feeling the heat.

Until today, EatWith had limited its focus to Tel Aviv, Israel and Barcelona, Spain. All in all, they have about 130 hosts between the two countries, with “thousands” of hopeful hosts waiting for approval around the world.

At this morning’s Disrupt NY conference, the company announced plans to launch in at least two new locations: right here in New York City, and in a second location that will be voted on by the EatWith community in the coming weeks.

EatWith has thus far raised $1.2M, all from Israeli investors. Around 80% of the round was funded by Israel’s Genesis Partners, with the rest funded by local angels.

Of course, just because someone is willing to cook for strangers doesn’t mean they… you know, should be. I mean, I’d cook for just about anyone as long as they don’t mind that the meal is burnt toast with runny scrambled eggs. With this in mind, EatWith has given some hosts “EatWith Verified” badges. For now, this means that an EatWith employee has personally gauged that host’s food quality and cleanliness. Because that doesn’t scale all that well, they’re working on a system to allow frequent users to help verify hosts moving forward.

What keeps these dinners from becoming tourist traps themselves?

We’d like each host to limit the number of meals they host to 1 or 2 times a week. This keeps it intimate.

How do you vet for quality as you scale?

What has surprised you most so far?

We were surprised by how many users — especially in Tel Aviv — were eating with hosts in their own town, rather than while traveling. We see less of this in Barcelona, as it’s a pretty tourist-centric area. 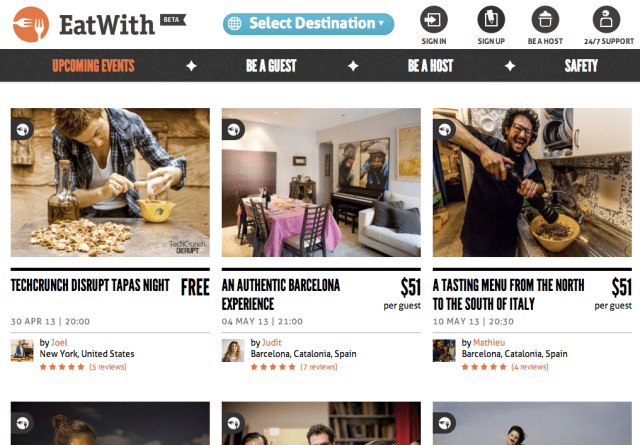